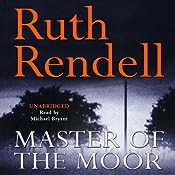 The bleak expanse of Vangmoor was a dark, forbidding place. One victim had been found there, blonde, her face disfigured, her head shorn close to the scalp - killed without motive or mercy.

Then a second woman went missing on the moor, and a sense of utter dread gripped the fifty local men who searched for her. Someone watched them in that treacherous place. Was he a killer? Or was he merely angry that a killer had usurped him? For he, and only he, was the Master of the Moor. Columnist Stephen Walby, known as the Voice of Vangmoor, often goes on long walks through the countryside that lies outside his window. However, events take on a sinister turn when he stumbles across the body of a young woman, whose face has been badly disfigured and her hair shaven.

After another corpse surfaces he finds himself under suspicion from the local police, and when he then goes on to discover that his wife has been having an affair, tragedy ensues..

This is a Ruth Rendell stand-alone published in 1982, before she began publishing this style of book under the pseudonym of Barbara Vine.

Like his grandfather before him, Stephen Walby has an obsession with Vangmoor. It came as a surprise to me that Stephen is a relatively young man, only in his early twenties. I thought Rendell made him seem much older than he is. He also seems to have the knack of turning up in the wrong place at the wrong time, eventually giving the police no alternative to taking him in for questioning, regarding him as a "person of interest" in the Vangmoor murder cases.

The story takes a savage twist about half way through, when Stephen reacts violently upon finding out that his wife has been having an affair. Is Stephen Walby a dormant psychotic? His comfortable world is constantly under challenge. The strings that anchor Stephen to reality are snapped when a childhood friend reappears.

And just when the reader thinks they have it all worked out, the book takes another twist, one that you could not have predicted, as the Master of the Moor claims his final victim.

Another of the characteristics of these early Rendell stand-alones, by comparison with the Wexford series, is that they are relatively short books. According to Amazon, it is only 218 pages long. For example THE VAULT, one of the later Wexfords, is more than 60 pages longer, as are many of her later books.

I have reviewed the following Barbara Vine novels
THE BIRTHDAY PRESENT
4.8, A DARK ADAPTED EYE

Interesting choice, Kerrie! And it's a good reminder to me that I haven't read those earlier Rendell's in a long time. Now all I need is a 42-hour day to try to make time for re-reads... *sigh*

I have not read this one but saw the TV version of it. I enjoyed it. I totally agree with you on The Birthday Present. I did not care for it. Loved The Dark Eye Adapted. Need to get to the many Rendell/Vine books sitting on my shelf!

I read this one and thought it was pretty good - there is also a very dark and moody TV version with Colin Firth (ie Mr Darcy!) in an unlikely role, and also very good.

I'm afraid that this one (which, coincidentally, I only read a few weeks ago) left me with a rather unpleasant aftertaste. It was neatly put together, but the main character was so odd I found it hard to care about whether he was guilty or innocent. I usually enjoy Rendell's/Vine's books, but I didn't like this one.