Review: BEFORE I GO TO SLEEP, S.J. Watson 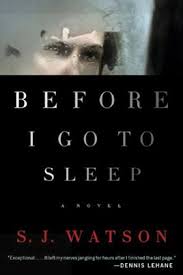 Christine wakes up every morning in an unfamiliar bed with an unfamiliar man. She looks in the mirror and sees an unfamiliar, middle- aged face. And every morning, the man she has woken up with must explain that he is Ben, he is her husband, she is forty-seven years old, and a terrible accident two decades earlier decimated her ability to form new memories.

But it’s the phone call from a Dr. Nash, a neurologist who claims to be working with Christine without her husband’s knowledge, that directs her to her journal, hidden in the back of her closet. For the past few weeks, Christine has been recording her daily activities—tearful mornings with Ben, sessions with Dr. Nash, flashes of scenes from her former life—and rereading past entries, relearning the facts of her life as retold by the husband she is completely dependent upon. As the entries build up, Christine asks many questions. What was life like before the accident? Why did she and Ben never have a child? What has happened to Christine’s best friend? And what exactly was the horrific accident that caused such a profound loss of memory?

Every day, Christine must begin again the reconstruction of her past. And the closer she gets to the truth, the more unbelievable it seems.

BEFORE I GO TO SLEEP is an ambitious debut novel: a story told from the point of view of an amnesiac whose memory, both short term and most of her long term, disappears overnight and dumps her back into life each morning over two decades earlier. Even then her memory of life until then is patchy and imperfect.

You get the general gist of the novel from the synopsis (above). There is a mystery on several fronts: why over twenty years have elapsed since the "accident" happened that left Christine like this; whether the two main people in her life, her husband and the neurologist, are actually telling her the truth; whether the fact that Christine was a writer had anything to do with her accident.

Christine, at the prompting of her neurologist, resorts to a ploy that Mike Befeler's elderly protagonist Paul Jacobsen also uses in the geezer lit cozy  RETIREMENT HOMES ARE MURDER (published 2007), keeping a journal on a daily basis. The journal becomes his memory. In Christine's case she records what she is told as well as what happens to her. So this "memory" is imperfect as well.

There was enough in BEFORE I GO TO SLEEP to keep me going, sufficient curiosity about what had happened to Christine, whether she would have a miraculous recovery that would put everything in its place. I think Watson probably took the theme as far as he could. There was the impression that the author was exploring some laneways to see where they led, only to back out of them when they became unproductive. As Christine pieces together her story via her journal, so too the reader, on another level, puts together the timeline of what has happened to Christine in the last twenty-plus years. Therein lies the mystery element. There are a number of story elements that remain unexplained and of course the reader at times knows quite a bit more than Christine does even though she diligently reads through her ever expanding journal when reminded to.

BEFORE I GO TO SLEEP won the 2011 CWA John Creasey (New Blood) Dagger and the Galaxy Book Award for 2011 Crime & Thriller Novel of the Year as well as coming to the attention of Richard & Judy.

Other reviews and sites to visit

Nice review, Kerrie. I think the popularity of this one must be partly due to the need to find out what is actually going on (if/when Christine remembers) but I don't think the "twist" is very good, and I think it is a book that makes you think of flaws in it after you've finished it. But, it passed the time quickly enough! If you haven't read Into the Darkest Corner by Elizabeth Haynes (very cheap indeed on Kindle when I read it last summer) I'd be interested to know what you make of that.

Thanks for the recommendation of ITDC Maxine. Bit pricey on Kindle at present but I'll keep my eye out for it.

I know that the reviews of this one are very mixed, but I am determined to try it at some point and form my own opinion :)

I think you will enjoy it Dorte

I enjoyed reading this one as well, and I'm looking forward to reading more by this author at some point!! I couldn't put it down which is always a good thing :) Great review!

I found this book to be an amazing read. I was very surprised to see that it was S.J. Watson's first novel. None of the rookie errors including unbelievable characters or unrealistic plot twists are here. Watson hits the literary scene with a superb psychological thriller up there with the best of them. The story grabs you from the beginning and never lets up. Christine wakes up every day not knowing who she is. She thinks she is in her 20s and always shocked to find she is a middle aged woman. For the first three quarters of the book there are basically three characters. Christine, her husband Ben and her doctor, Dr. Nash. Each day her husband must remind her who she is and answer her endless questions. He has also pasted current photos on the bathroom mirror to remind her of what is real. She slowly gains knowledge as the day progresses but when she goes to sleep at night it all leaves and the next day starts the same.