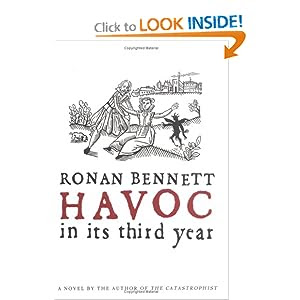 A penetrating and ambitious historical novel, Havoc, in Its Third Year is an ingenious, often deeply unnerving narrative of seventeenth-century England that speaks directly to the fanaticism and fears of today.

The time is the early seventeenth century, as the quarrel between Royalists and Parliamentarians turns toward civil war, and that between Catholics and Protestants leads toward bloody religious tyranny; the place is a town in northern England, set in a grim landscape swept by crop failures, plague and rumors of war, in which rigid Puritans have taken over government and imposed their own rules.

At the center of the novel is John Brigge, the Coroner and a Governor of the town, though not by any means as convinced a zealot as his fellow governors have become. Married and deeply in love with Elizabeth, who is pregnant with their first child, he has a guilty secret to hide in his affection for Dorcas, his wife's ward -- a secret which, in the world of religious prejudice and extremism toward which England is moving, can be lethal.

Determined to obey the law, rather than prejudice and the need to make an example of an Irishwoman accused of murdering her own infant, Brigge draws upon himself the hostility and suspicion of the powerful men who have been his fellow governors and who now set out to destroy him in the name of morality.(more)

Set in Northern England, in a town that at times almost seems as if it must be London, in what the author claims is the 1630s, HAVOC in its third year gives a grim picture of a disintegrating society. This is not history seen from the top, as we often have with political histories, but seen from the bottom, looking at events from the point of view of the ordinary person. The tension between those trying to keep the peace and those trying to feed their families is very real.

John Brigge is the coroner but lives outside the town, He is also a member of the board of governors, a friend of the Master. Fanaticism is growing. Suspicion that Irish immigrants, secret papists, and an impending invasion are responsible for failed crops, rising prices, disease, and poverty, give power hungry members of the board of governors the opportunity they need to increase their powers and to implement drastic punitive measures. Other members of the board, including John Brigge, become their victims.

As coroner John Brigge works with an ad hoc jury of common citizens to decide the cause of death of all corpses. The jury vote according to their eyes and often reflect the opinions of the townspeople rather based on any expert knowledge. Too often there is no rationale explanation of the cause of death and the reason assigned is "act of god". The starting point of the unravelling of John Brigge's life is his dissatisfaction with the commonly held view that an Irishwoman Katherine Shay has killed her baby. His suspicions are aroused when the serving wench at the inn where the murder supposedly happened, who is cited as a witness to the murder, is mysteriously unavailable.

HAVOC is rich in detail and presents a description of the dystopian society in early Stuart England that will eventually spawn a civil war, the execution of a king, and the rise of Cromwell. Fascinating reading.

Yup, I want to read this one and my library has it!