Review: I AM HALF-SICK OF SHADOWS, Alan Bradley 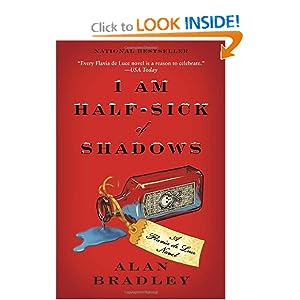 It’s Christmastime, and Flavia de Luce—an eleven-year-old sleuth with a passion for chemistry—is tucked away in her laboratory, whipping up a concoction to ensnare Saint Nick.

But she is soon distracted when a film crew arrives at Buckshaw, the de Luces’ decaying English estate, to shoot a movie starring the famed Phyllis Wyvern.

Amid a raging blizzard, the entire village of Bishop’s Lacey gathers at Buckshaw to watch Wyvern perform, yet nobody is prepared for the evening’s shocking conclusion: a body found strangled to death with a length of film. But who among the assembled guests would stage such a chilling scene? As the storm worsens and the list of suspects grows, Flavia must ferret out a killer hidden in plain sight.

A film crew to use Flavia's home Buckshaw as a set is the latest in her father's money making schemes to stave off the debtors. There's plenty of room at Buckshaw to accommodate them and the arrangement is that each will stay out of the other's way. But he has not reckoned with Flavia's insatiable curiosity, nor with the fact that someone will commit murder.

On the night of the blizzard almost the entire population of the village is visiting to watch an impromptu fundraising performance by the main actors. And so it becomes the perfect setting for a "locked room" mystery.

I have enjoyed each in this series featuring 11 year old sleuth Flavia de Luce, Flavia has an insatiable love of Chemistry and this Christmas she wants to test whether Father Christmas is a real person by laying a sticky trap for him on the main chimney.

But there is a delightful cast of characters apart from Flavia: her sisters Daffy and Feely, her father's man-servant Dogger, the cook Mrs Mullet, Dr. Darby, the Vicar and his wife, and even the policemen who come to investigate, all feel larger than life.

This more-or-less cozy series is set post World War II and is certainly worth reading in order.

I have also reviewed
4.8, THE SWEETNESS AT THE BOTTOM OF THE PIE
4.5, THE WEED THAT STRINGS THE HANGMAN'S BAG
4.5, A RED HERRING WITHOUT MUSTARD

Kerrie - I like the Flavia de Luce character very much too. Such terrific stories and I'm glad you liked this one. I agree with you that they are best read in order.

The more I read this series the more I realize that the strength is in the charccters and not the mystery plots. This has the weakest mystery of the lot with an obvious villain. I was greatly disapoointed with it by the end. It seems that readers love Flavia so much they are willing to overlook some of the egregient flaws in Bradley's stories. The mystery surrrounding Flavia's mother and the questionable parentage of Flavia -- which I hope will soon be revealed -- is the most interesting part of the series. Perhaps the most recently published book will be an improvement over this one.