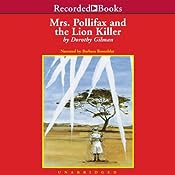 Part-time CIA agent Emily Pollifax accompanies her young friend, Kadi Hopkirk, to Africa on a mission to stop terrorists from disrupting the coronation of Sammat, Kadi's childhood friend, as the new king of Ubangiba.

Beneath the rather cozy exterior of this story are some quite serious considerations related to issues surrounding small African nations trying to establish their place in world affairs, and viable lives for their citizens, in the late 20th century.

Kadi Hopkirk is a reminder of the violent past of the improbably named Ubangiba for she is the daughter of white American doctors killed during a revolution. Sammat on the other hand is the overseas educated grandson of the old king. He once imagined that he could set up a democracy but finds that he is actually king-to-be.

The country of Ubangiba has been impoverished by megolomaniac rulers since Sammat's grandfather was assassinated and even now there is a group murdering people but making it look as if they have been killed by a lion. But there are no lions in Ubangiba. We are talking here of a population that still believes in witchcraft.

On the surface Emily Pollifax is an elderly woman, but, some years before, at the age of 60 she became a part time CIA agent, and she has rather Marple like qualities of observation.  Soon after their arrival young Kadi is attacked in the palace grounds, and, having survived that attack, she is abducted. Mrs Pollifax thinks king-designate Sammat is altogether too trusting of those around him.

About the author
Dorothy Edith Gilman (June 25, 1923 – February 2, 2012) was an American espionage and mystery fiction writer. She was best known for the Mrs. Pollifax series. Emily Pollifax, her heroine, became a spy in her 60s and is very likely the only spy in literature to belong simultaneously to the Central Intelligence Agency (CIA) and the local garden club.

In 2010 Dorothy Gilman was awarded the annual Grand Master by the Mystery Writers of America.
She died in New York of Alzheimer's disease in 2012, aged 88.
More at Wikipedia.

Oh, I used to love the Mrs. Pollifax mysteries, Kerrie. Thanks for reminding me of them.

I came across some of these at my local library in the UK and was utterly charmed by them. Thank you for bringing them back to my mind!

I know I have some of the early ones of these *somewhere* in a box... it's terrible when you start thinking about buying them again as it's too hard to hunt for them! It was a series I enjoyed.