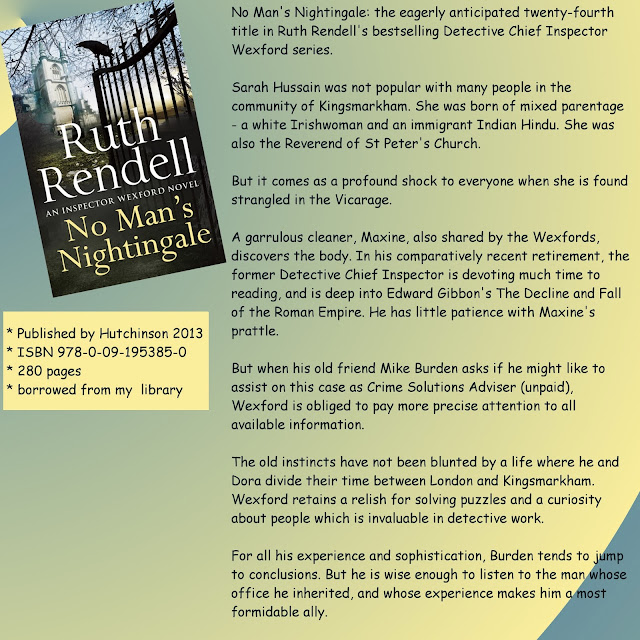 Nearly 40 years on since he emerged in FROM DOON WITH DEATH (1964) Reg Wexford, now retired after a lifetime as Chief Inspector Wexford, is happily reading his way through The Decline and Fall of the Roman Empire. Retirement is suiting him better now than it did in THE VAULT where he took up Detective Superintendent Tom Ede's offer of being an unpaid serious crimes adviser. But he still likes to feel needed, doing something important.

This time it is former colleague and friend Mike Burden who asks him if he would interested in a bit of unpaid consultancy following the murder of a local vicar.

Most of NO MAN'S NIGHTINGALE  is written from Wexford's point of view.  Wexford finds for example that Burden is running the the investigation differently to the way he would have done. In his opinion Burden has too many conferences and Wexford finds that in his consultancy capacity he is really not able to voice his opinions freely. Nor can he prevent his friend from making some disastrous errors. Because the murder has taken place in the community in which he lives Wexford finds he at times has to tread a very narrow line. For example, as a private person he learns information that he wouldn't come across as a policeman, and he is not sure whether he is still duty bound to report it to the police.

I think Rendell has taken great pains to present us with an aging Wexford, whose brain is still very much alive and alert, but no longer quite as agile as it used to be. But his powers of observation and deduction are still strong.

So, an aging person myself, that assured my feeling of empathy with Wexford.

And what about Rendell, now 83. How is her writing going? Well, I don't think this is her best book, but it still puts her at the forefront of today's writers. Fans will enjoy Wexford's latest outing.

Kerrie - I like your new scrapbook look. And I'm glad this latest Wexford outing works for you. In my opinion, Ruth Rendell at her weakest is heaps better than lots of people at their best...

I love that Wexford is aging as am I. Good news, we can still think at 80. Thanks.

I like your new scrapbook look too - most impressive. And I'm tempted by this new Wexford book - I like to think my brain will stay alert even if my body is slowing down!