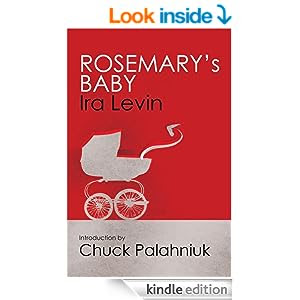 Rosemary and Guy Woodhouse, an ordinary young couple, settle into a New York City apartment, unaware that the elderly neighbors and their bizarre group of friends have taken a disturbing interest in them. But by the time Rosemary discovers the horrifying truth, it may be far too late!

I don't think I have ever seen the film (1968) based on this book, starring Mia Farrow. That was probably a good thing as I didn't know how the story ended.

The Introduction by Chuck Palahniuk prepared me a little though. He begins


"Before Ira Levin, horror always happened soemwhere else... it was a comfort to know that real life-threatening horror never occurred at home. You had to be baited far, far away. For the century leading up to 1967 the real horrors had been elsewhere in the world, always outside the borders of England and the United States. If you stayed home you'd be safe... Home constituted this safe little island where women could raise children in domestic bliss."


But Ira Levin changed all that, for, on the very edges of crime fiction, ROSEMARY'S BABY  is a horror story, showing that there is no safety in your own home either.

There is a cinematographic quality to the action, and I kept imagining how chilling it would be on the silver screen.

During her early pregnancy Rosemary Woodhouse has incredible pain, and then peculiar dreams. A friend who warned her about the apartment house she and her husband have moved, is taken ill just before meeting with her, and then falls into a coma from which he never recovers. Rosemary thinks her husband has developed an unhealthy affection for their elderly neighbours but continues to trust Guy.

I've read this novel as my contribution to Past Offences #1967book meme of March this year.

It is an interesting read, isn't it, Kerrie. And I agree that Levin did that 'growing fear' in what was supposed to be a safe home environment very well.

He's great at that sort of horror-close-to-home read, isn't he? I've really enjoyed his other books too.

I love the movie so much, that I've always wanted to read the book. I haven't yet, but I know I will, eventually.

Good one for Crime Fiction of the Year! I saw the movie and never read the book. Great build up of suspense.