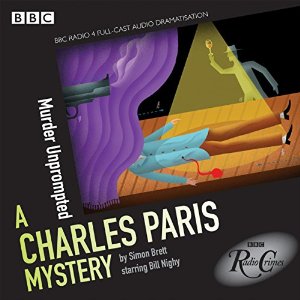 Bill Nighy stars as Charles Paris in a BBC Radio 4 full-cast dramatisation of Simon Brett's novel.
Charles Paris is understudying in a West End production whose star, Michael Banks, seems unable to master the script.
Has Charles time to solve a murder, win Frances' heart and make it onstage by the time the curtain goes up?

Simon Brett's Charles Paris series are always a delight to read and a radio play featuring Bill Nighy doubles the delight. Nighy makes a very believable Charles Paris and he is well supported by Suzanne Burden as his wife Francis.

Just the thing for a relative short journey.