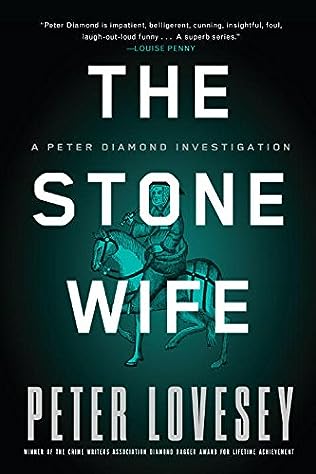 At an auction house in Bath, England, a large slab of carved stone is up for sale. At the height of what turns into very competitive bidding, there is a holdup attempt by three masked raiders who are trying to steal the stone. They shoot and kill the highest bidder, a professor who has recognized the female figure carved in the stone as the Wife of Bath from Chaucer's Canterbury Tales. The masked would-be thieves flee, leaving the stone behind.

Peter Diamond and his team are assigned to investigate, and the stone is moved into Diamond's office so he can research its origins. The carving causes such difficulties that he starts to think it has jinxed him. Meanwhile, as Diamond's leads take him to Chaucer's house in Somerset, his intrepid colleague Ingeborg goes undercover to try to track down the source of the handgun used in the fatal murder.

Another good read from Peter Lovesey with a sprinkling of humour.

When a would-be buyer of a massive stone carving thought to be of the Wife of Bath is shot dead in the middle of the auction, Peter Diamond becomes the temporary custodian of the carving. She squats on her "ambler" in the corner of his office, and occasionally he finds himself talking to her.

The investigation into the murder takes Diamond and his team into some very strange territory indeed. The victim is an English professor, not particularly well-liked by his students or colleagues. There is no shortage of possible suspects: the victim's wife former husband is an extremely wealthy property developer; then there is an ambitious academic who would never become professor while the victim was alive; and what about the "fixer" who supplied the gun?

I really like the way Lovesey can create an interesting plot with lots of red herrings from almost nothing.

I read many mystery series and am thinking of reading Peter Lovesey books.