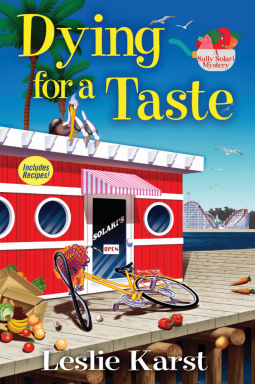 Synopsis (Net Galley)
After losing her mother to cancer, Sally Solari quits her job as an attorney to help her dad run his old-style Italian eatery in Santa Cruz, California. But managing the front of the house is far from her dream job.

Then in a sudden twist her Aunt Letta is found murdered in her own restaurant, and Sally is the only one who can keep the place running. But when her sous chef is accused of the crime, and she finds herself suddenly short-staffed, Sally must delve into the world of sustainable farming—not to mention a few family secrets--to help him clear his name and catch the true culprit before her timer runs out.

Leslie Karst serves a platter of intrigue in her stirring and satisfying debut Dying for a Taste, which is sure to become a new favorite of food mystery fans.

There is a lot about her Aunt Letta that Sally Solari doesn't know, in fact they weren't even really all that close, and it comes a great surprise to her when she inherits her aunt's restaurant. Aunt Letta's murder was quite vicious, but surely no-one hated her that much? And then Sally finds evidence that Letta had been being threatened. She is galvanised into action when, in the absence of any other suspects, the police arrest the head cook of her new restaurant.

Towards the end I felt that there were actually too many suspects and that blurred the plot lines a bit. Ultimately though quite a satisfying read, with a few recipes in the final pages to stimulate your culinary juices.

About the author
Originally from Southern California, Leslie Karst moved north to attend UC Santa Cruz (home of the Fighting Banana Slugs), and after graduation, parlayed her degree in English literature into employment waiting tables and singing in a new wave rock and roll band. Exciting though this life was, she eventually decided she was ready for a "real" job, and ended up at Stanford Law School.

For the next twenty years Leslie worked as the research and appellate attorney for Santa Cruz's largest civil law firm. During this time, she discovered a passion for food and cooking, and so once more returned to school--this time to earn a degree in Culinary Arts.

Now retired from the law, Leslie spends her time cooking, singing alto in the local community chorus, gardening, cycling, and of course writing. She and her wife and their Jack Russell mix, Ziggy, split their time between Santa Cruz and Hilo, Hawai'i.