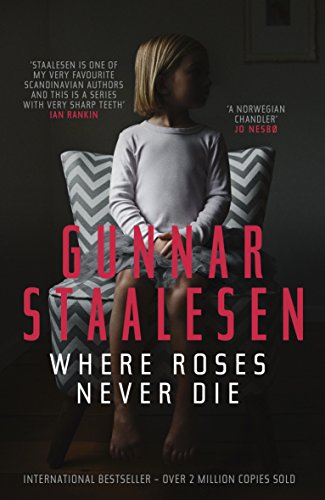 September 1977. Mette Misvær, a three-year-old girl disappears without trace from the sandpit outside her home. Her tiny, close middle-class community in the tranquil suburb of Nordas is devastated, but their enquiries and the police produce nothing. Curtains twitch, suspicions are raised, but Mette is never found.

Almost 25 years later, as the expiry date for the statute of limitations draws near, Mette’s mother approaches PI Varg Veum, in a last, desperate attempt to find out what happened to her daughter. As Veum starts to dig, he uncovers an intricate web of secrets, lies and shocking events that have been methodically concealed. When another brutal incident takes place, a pattern begins to emerge …

Chilling, shocking and full of extraordinary twists and turns, Where Roses Never Die reaffirms Gunnar Staalesen as one of the world’s foremost thriller writers.
Winner of the Petrona Award 2017

From the start of this story I could not get away from the feeling that I have read other novels where other authors have deal with this scenario: little girl goes missing from outside the house where she is playing while mother is keeping half an eye on her.

The cold case that Varg Veum tackles revealed little about the child's disappearance during the original investigation, apart from the fact that the investigators felt there was something about the community that they weren't quite getting. The residents knew more than they were prepared to say and there was something "funny" about the cooperative community housing project. Now 25 years on, Veum finds that most of the couples are divorced and in the main they are more willing to talk. There are things they want to unburden.

Coincidentally one of the former residents was recently an innocent passerby during a jewellery robbery in town. He was shot dead by one of the robbers during an altercation on the footpath outside the store. This coincidence ensures police cooperation with Varg Veum.

This turns out to be only the first in a number of coincidences in the plot and a very different picture emerges of what happened to Mette. Varg Veum is middle-aged, a former policeman, a persistent and intuitive investigator who is not afraid to ask questions and to call in favours. He has a troubled past and an alcohol problem, but appears to be getting the better of it.

Gunnar Staaleson has been a prolific Norwegian crime writer since 1993, with mostly only novels written in the last decade available in English.  It appears that there are 18 in the series in Norwegian, 7 translated into English. This is the first one that I've read but it certainly won't be the last. Four are currently available on Kindle.

About the author (Wikipedia)


Gunnar Staalesen (born 19 October 1947 in Bergen) is a Norwegian writer. Staalesen has a Cand philol. degree from Universitetet i Bergen and he has worked at Den Nationale Scene, the main theater in Bergen. Staalesen is best known for his crime novels involving private detective Varg Veum.

I don't know if it's the graphic on the chair, but the cover is stunning.

A slight typo on the author's name...

The title grabbed me, and your review closed the deal. It also reminds me a little of Leslie Thomas's The Last Detective, reviewed this week by Tracy K, tho, without the humor.