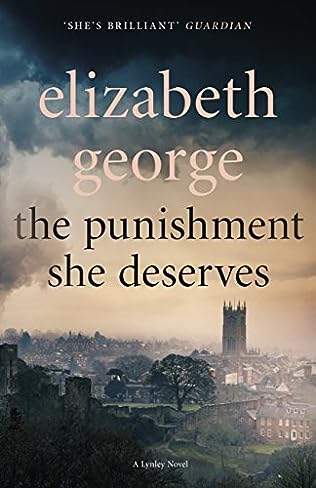 Inspector Thomas Lynley of Scotland Yard and his pugnacious and deeply loyal detective sergeant Barbara Havers find themselves up against one of the most sinister murder cases they have ever encountered. Fans of the longtime series will love the many characters from past books who join Lynley and Havers, but listeners new to the series will quickly see why Elizabeth George is one of the most popular and critically acclaimed writers of our time.

Both a gripping listen and a deeply complex story of revenge and redemption, this novel will be remembered as one of George's best.

It is some time since I have read a title in this series and maybe I paid the penalty for not keeping up, although there have only been 2 novels added since BELIEVING THE LIE.

You may wonder at my lower rating, but this book made me cross on many levels. Let's start with the size. It is very long by crime fiction "standards" and I thought there was a lot of detail that could have been pared. There were a number of plot lines, mostly related to the main story, but it is not good when you know things are coming to an end, and then you realise you have 150 pages to go. The problem too is that the writing is quite dense and so doesn't lend itself to quick reading. And I thought there were parts that might have been a good idea initially - like Barbara Havers learning to tap dance - but could have been edited out. It took me almost a week read.

It felt to me that the plot had been sketched twice - the first with Havers and Isabelle Ardery in it, and then Part II (when Part I didn't work) with Havers and Lynley in it. In the long run the author decided to go with both.

The main plot, the investigation of the apparent suicide of the deacon of a local church, had a number of sub-lines all of which were finally drawn together satisfactorily but sometimes I lost sight of where we were heading, or I became impatient for us to get back to the Havers & Lynley investigation.

I am assuming that I will be in the minority with my dissatisfaction.