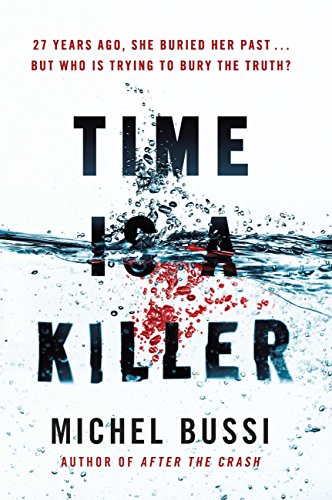 It is summer 1989 and fifteen-year-old Clotilde is on holiday with her parents in Corsica. On a twisty mountain road, their car comes off at a curve and plunges into a ravine. Only Clotilde survives.

Twenty-seven years later, she returns to Corsica with her husband and their sulky teenage daughter. Clotilde wants the trip to do two things - to help exorcise her past, and to build a bridge between her and her daughter. But in the very place where she spent that summer all those years ago, she receives a letter. From her mother. As if she were still alive.

As fragments of memory come back, Clotilde begins to question the past. And yet it all seems impossible - she saw the corpses of her mother, her father, her brother. She has lived with their ghosts. But then who sent this letter - and why?

An intriguing book which keeps the brain working at the little mysteries that the author presents for resolution. We mainly see the story through Clotilde’s diary which she kept in the days before the car crash that killed her father, mother and brother. But we know that the diary is not in Clotilde's hands, so who is it reading the story to us? And how reliable was Clotilde's point of view? She was after all only 15 years old and brought a teenager's interpretation to her observations.

Twenty seven years later Clotilde, now a successful Parisian lawyer, brings her family to Corsica for the first time, and becomes obsessed with the idea that her mother is still alive. But how can that be? Surely the bodies in the car were identified at the time. And then little things beginning to occur which could not be coincidence. Clotilde’s obsession strains her marriage. Then a retired policeman tells her that he has proof that the car crash was not an accident. Her father's car had been tampered with. Her family was murdered.

A slightly lower rating than I might have otherwise have given, due to some reservations about the final pages.

This sounds intriguing. I like the idea of the multiple time periods (I'm a sucker for those). How do you pronounce the protagonist's name? I'm stumbling over it...thanks for another great review. :)