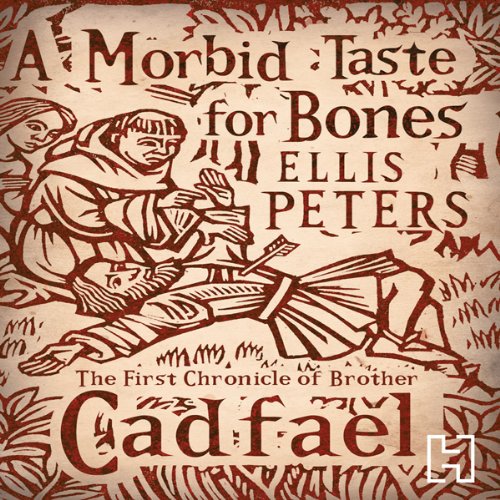 In 1137 the ambitious head of Shrewsbury Abbey has decided to acquire the remains of Saint Winifred for his Benedictine order. Brother Cadfael is part of the expedition sent to her final resting place in Wales, where they find the villagers passionately divided by the Benedictines' offer for the saint's relics.

Canny, wise and all too worldly, Cadfael isn't surprised when this taste for bones leads to bloody murder. The leading opponent to moving the grave has been shot dead with a mysterious arrow, and some say Winifred herself dealt the blow. Brother Cadfael knows that a carnal hand did the killings, but he doesn't know that his plan to unearth a murderer may dig up a case of love and justice, where the wages of sin may be scandal - or his own ruin.

I chose this book because it is the first of the series. My fellow listener and I are already familiar with the Brother Cadfael character, having watched the TV series with Derek Jacobi playing the leading role, decades ago. We have also been to Shrewsbury on one of our trips to the UK.

These novels are a lovely reminder of a historical period which was a turbulent time at the end of the Middle Ages. Brother Cadfael lives in Shrewsbury, returned from the Crusades, and now a monk and a herbalist. In some senses his mysteries are very ordinary investigations, but they are imbued with a strong sense of history, and sometimes with a touch of romance.

In this story Brother Cadfael is part of an expedition to his native Wales to "liberate" St Winifred's bones which apparently have been neglected by the people who live in the village near where she is buried. The locals are understandably upset at the incoming Englishmen who have come to steal the bones and take them back to England.

The first in quite a long series of books, there is a lot of introductory material about Cadfael, his background, and those who live with him in the Shrewsbury monastery.

At just over 7 hours this is a good title to be listened to over a couple of travelling weeks.

The only other Brother Cadfael title that I have reviewed since beginning this blog is THE PILGRIM OF HATE
The title was #10 in the series, I listened to it back in 2010, with the same narrator.

See more about Ellis Peters titles that I had read before beginning this blog.