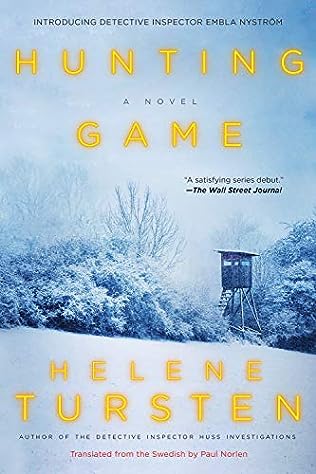 Helene Tursten's explosive new series features Detective Inspector Embla Nyström, a sharp, unforgiving woman working in a man's world. When one of her peers is murdered during a routine hunting trip, Embla must track down the killer while confronting a dark incident from her past.

Twenty-eight-year-old Embla Nyström has been plagued by chronic nightmares and racing thoughts ever since she can remember. She has learned to channel most of her anxious energy into her position as Detective Inspector in the mobile unit in Gothenburg, Sweden, and into sports. A talented hunter and prizewinning Nordic welterweight, she is glad to be taking a vacation from her high-stress job to attend the annual moose hunt with her family and friends.

But when Embla arrives at her uncle’s cabin in rural Dalsland, she sees an unfamiliar face has joined the group: Peter, enigmatic, attractive, and newly divorced. And she isn’t the only one to notice. One longtime member of the hunt doesn’t welcome the presence of an outsider and is quick to point out that with Peter, the group’s number reaches thirteen, a bad omen for the week. Sure enough, a string of unsettling incidents follow, culminating in the disappearance of two hunters. Embla takes charge of the search, and they soon find one of the missing men floating facedown in the nearby lake. With the help of local reinforcements, Embla delves into the dark pasts of her fellow hunters in search of a killer.

I found this novel a little difficult to get into which I eventually put down to the style and the translation. I found characters and places difficult to identify.

Embla Nyström is a tough lady. She has suffered from nightmares for years, linked to the disappearance of her best friend Lollo when they were teenagers from a nightclub. Embla never revealed to the police and parents the true circumstances of Lollo's disappearance, particularly the link to some gangsters.

The two missing men were once a group of 3, who nicknamed themselves "the three musketeers". Then 12 months ago one of them drove his car at high speed into a tree on his way home from that year's annual moose hunt.  It is Embla who discovers the link between these three men to the disappearance of Peter's sister.

An interesting but demanding read.
The author reveals in her final words that Embla has already made an appearance in one of the Inspector Huss novels, but now, she says, it is time for Embla "to stand on her own two feet."

Looking for a great book? Fictionb.com is the best place to start. Here you will find simple lists of books in order by author and by series.Book Covers also available