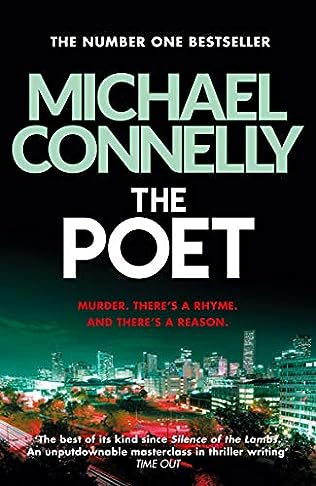 The apparent suicide of his policeman brother sets Denver crime reporter Jack McEvoy on edge. Surprise at the circumstances of his brother's death prompts Jack to look into a whole series of police suicides and puts him on the trail of a cop killer whose victims are selected all too carefully. Not only that, but they all leave suicide notes drawn from the poems of writer Edgar Allan Poe in their wake. More frightening still the killer appears to know that Jack is getting nearer and nearer. An investigation that looks like being the story of a lifetime, might also be Jack's ticket to a lonely end.

I was mainly prompted to read this because firstly, I have never read it before; and secondly, because there is a new title in this series, FAIR WARNING, recently published.  My Connelly reading has mainly been Harry Bosch.

Apparently before reading FAIR WARNING, I should also read THE NARROWS (2004) and THE SCARECROW (2009)

THE POET is one of those novels when you've just worked it all out, there is another twist, and you realised you've missed something major or there was something that you didn't know. It all makes for very engrossing reading.

I've also read
THE OVERLOOK
THE BRASS VERDICT
THE CONCRETE BLONDE
4.3, THE REVERSAL
4.4, SUICIDE RUN
4.4, ANGLE OF INVESTIGATION
Posted by Kerrie at 4:55:00 pm