Agatha Christie’s first novel, The Mysterious Affair at Styles, was the result of a dare from her sister Madge who challenged her to write a story. The story begins when Hastings is sent back to England from the First World War due to injury and is invited to spend his sick leave at the beautiful Styles Court by his old friend John Cavendish. Here, Hastings meets John’s step-mother, Mrs Inglethorp, and her new husband, Alfred. Despite the tranquil surroundings Hastings begins to realise that all is not right. When Mrs Inglethorp is found poisoned, suspicion falls on the family, and another old friend, Hercule Poirot, is invited to investigate. 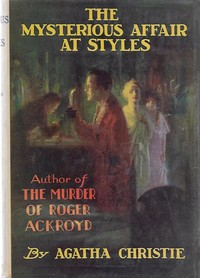 I have read this novel many times, but starting in February I am leading a small group into reading the first 5 Poirot novels and the first 5 Marples during the coming months..

So I have read this novel with a focus on what I want the group to get out of their reading.

So here are some of the points I want them to see:

My previous review on this site

My reviews of Agatha Christie novels