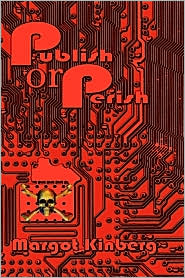 For Nick Merrill, a third-year graduate student at Tilton University, it really looks as if the world is his oyster. He has two women on a string, teaches a class he enjoys, is participating in an effective teaching project he finds stimulating, has a piece of software about to be accepted for publication, and then he wins a fellowship he was sure would go to a colleague.

But within a matter of days his world begins to fall apart. Not only does his girlfriend find out about his other relationship, his tutor steals his software, the colleague who did not win the fellowship is determined to have him disqualified for unethical behaviour, and there is a strong possibility his contract will be terminated. But, as the reader learns, this is not the worst that can happen.

By a third of the way in, PUBLISH OR PERISH becomes a carefully crafted murder mystery. The murders are solved by a very likeable former police detective-turned-professor Joel Williams. Now there is a protagonist I would like to see more of. Although there are a couple of police detectives who have been assigned to the case, and they do the hack work, it is Williams' intuition and powers of observation that make the breakthrough.

It was obvious to me, as one who doesn't know the American university system at all well, that Margot Kinberg knows her setting backwards. As far as debut novels go, this is a solid effort. I don't mean that in a derogatory sense. If I have one criticism it is that it took, for me, a little too long to draw the threads finally together. PUBLISH OR PERISH is an entertaining crime fiction read, and I'm certainly willing to read Margot Kinberg's next book.

Margot Kinberg was born and raised in Pennsylvania, where she graduated from Indiana University of Pennsylvania and later, received her Master's Degree from LaSalle University. After teaching at the University of Delaware for several years and earning her Ph.D. there, Kinberg moved west. She taught at Knox College in Galesburg, IL, and is currently an Associate Professor at National University in Carlsbad, California. Kinberg currently lives in southern California with her husband, daughter and two dogs.

I like the idea of a police detective turned professor. Is this a start of a series?

This is Margo's first novel Belle.
She says the next one, which she is working on now, is a standalone - Same detective, town/campus, and so on, but different victim, murderer, etc...