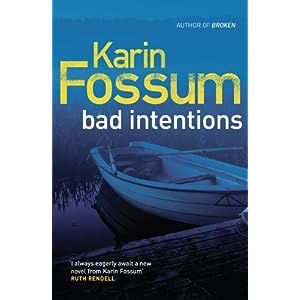 I read BAD INTENTIONS on my Kindle, a review  e-copy supplied by the publishers Houghton Mifflin Harcourt through NetGalley

Publisher's Blurb
In this chilling return to the Inspector Konrad Sejer series, the detective and his partner investigate the deaths of two teenagers in rural Norway. One victim was a lonely Vietnamese boy, the other a psychiatric patient let out for a weekend in the woods with friends. Grief devastates their two mothers. Sejer can’t help himself and, overcome by sympathy, he promises to deliver an explanation for what has befallen them. The pursuit will bring him face-to-face with pure evil . . .

My take
Once they were just little kids with skinny legs and pointy knees. How did they become so evil?


Any second now Axel’s green Mercedes will appear around the bend. While he waits, he chews his nails. He has bitten them right down. The tips of his fingers are red and sore. He thinks about everything that has happened and about how he is going to move on. He knows he has to make a choice…. But sometimes we need to face reality. And perhaps that is not fair, but nothing about this situation is fair. It’s best to keep my mouth shut, he thinks, I’m protecting Axel and Reilly. They are my friends, and we’re in this together for ever.

Despite the fact that it is #7 in Fossum's Inspector Sejer series this is not a police procedural. It is rather a melancholic exploration of the way guilt can tunnel its way through the minds of those who feel it. Jon is the first to break and from then on the slippery slide is inevitable for the others. Who will crack next? And did they actually commit a crime?

Sejer and his colleague Skarre seem almost to take a backseat in this novel, observers and prompters to the final undoing:


He sat listening to the hum of the police station. He liked being a part of a big engine. He liked interrogating people, he liked spotting the lie when it came. A lie had its own pitch, and over many years he had learned to recognize it. He liked the moment when the confession finally spilled out, when all the cards were on the table and the course of events could be mapped and filed.

The story is an exploration too of how sometimes the victims of crime can unexpectedly become allies who force the truth to come out.
There is so much to think about in BAD INTENTIONS and it really came up to my expectations.

Kerrie - Thanks for this review. Isn't it interesting how we can richly enjoy and really explore a crime fiction novel, even if the crime itself and the detectives aren't as prominent as other things in the novel...

Glad you enjoyed this one, Kerrie. I liked it but did not think it one of her best.

On the one hand I miss her early books which were more about police work, but I agree that her more psychological approach is also well done.

Hmmm. Sounds like an interesting read from your review. Not entirely sure it's one that would fit in my reading comfort zone, though. May have to check up on it some more.

Sounds like a book, and a series, that I would dearly love to read. Is order important here, do you feel? Or would I be all right reading them out of order?

I like to read things in order Jenn, and I think it does help so that you get character development. Not helped sometimes, as in this case, not all the Sejer novels have been published in English. Go for whichever ones come to hand!

It does sound good! Adding it to my wish list!