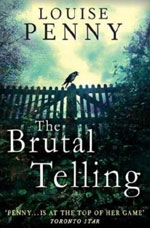 With those words the peace of Three Pines is shattered. As families prepare to head back to the city and children say goodbye to summer, a stranger is found murdered in the village bistro and antiques store. Once again, Chief Inspector Gamache and his team are called in to strip back layers of lies, exposing both treasures and rancid secrets buried in the wilderness.

No one admits to knowing the murdered man, but as secrets are revealed, chaos begins to close in on the beloved bistro owner, Olivier. How did he make such a spectacular success of his business? What past did he leave behind and why has he buried himself in this tiny village? And why does every lead in the investigation find its way back to him?

As Olivier grows more frantic, a trail of clues and treasures from first editions of Charlotte’s Web and Jane Eyre to a spider web with the word “WOE” woven in it lead the Chief Inspector deep into the woods and across the continent in search of the truth, and finally back to Three Pines as the little village braces for the truth and the final, brutal telling.

The discovery of the body of an apparent outsider dead on the floor of the bistro in Three Pines, murdered, appears to signal the end of life in the little Canadian hamlet as its residents know it.

But even before the murder, change has been on the way. The old Hadlee house, featured in an earlier novel, has been sold and is being re-born as an exclusive guest house. It's new owners are ambitious and unlikely to let anything stand in their way.

And why won't Olivier tell Inspector Gamache that he knew the murdered man?

Many of the residents living in Three Pines have come to escape from their old world and achieve a lifestyle change. But in a murder investigation secrets are the first thing to be uncovered. It just amazed me that some of it hadn't come out in earlier investigations. THE BRUTAL TELLING is after all #5 in the series.

This is a great read. There was a lot more that I was going to include in this review: how Gamache adds another member to his team, how we learn so much more about Gamache and his methods, the humorous images of Rosa the duck dressed in baby clothes to keep her warm, the development of the characters of the other members of Gamache's team, and how cleverly the threads of the mystery that surround the murder are woven. But really, I can't do better than to urge you to get hold of a copy of THE BRUTAL TELLING and see for yourself.
The writing is superb.
But I would really urge you to read the books in the series in order. That way you'll appreciate how Louise Penny has developed the setting and the characters who interact within it.
For myself, I have the next waiting on my shelves!

THE BRUTAL TELLING was the winner of the Agatha Award for best novel of 2009.

On a humorous note: Just recently I added Gotland to my list of places, fictional and otherwise, to avoid.
I think that list (Midsomer, St. Mary Mead, Gotland) should be expanded to include Three Pines don't you?

Kerrie - Excellent review! Thanks. I'm so glad you enjoyed this one, too. It really is a fine read. And you're right; it's best to read the books in order.

This is one series where readers need to read them in order. Bury Your Dead (# 6) contains many spoilers for The Brutal Telling. You're so right about Louise Penny - she's a superb storyteller.

When you wrote: "The discovery of the body of an apparent outsider dead on the floor of the bistro in Three Pines, murdered, appears to signal the end of life in the little Canadian hamlet as its residents know it" I thought; they must have got used to that by now! :D

I agree. This is an excellent book. Subsequent books in the series even made me rethink what mystery novels can be.

Wasn't this a fabulous book? And just wait....you will not believe how great BURY YOUR DEAD is. Truly. Louise Penny has taken her craft to whole new level. I reread alll the books in preparation for reading BURY YOUR DEAD and I love the way her writing has evolved. Cant, cant, can't wait for September when the next book will come out. :-)