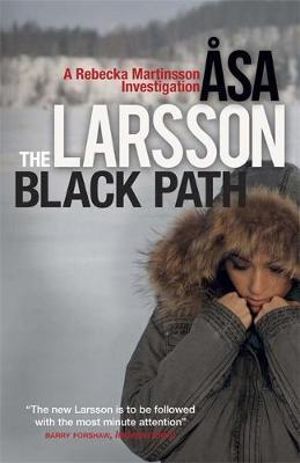 A woman’s body is found on a frozen lake, bearing the marks of grisly torture.
Inspector Anna-Maria Mella knows she needs help with the case – the woman was a key player in a mining company whose tentacles reach across the globe.

Lawyer Rebecka Martinsson is desperate to get back to work, to feel alive again after a case that almost destroyed her both physically and emotionally.

Soon she is delving into the affairs of the victim’s boss, the founder of Kallis Mining, whose relationship with the dead woman was complex and obsessive.
Martinsson and Mella are about to uncover a dark and tangled drama of family secrets, twisted sexuality, and corruption on a massive scale.

There were a number of reasons why this book took me longer than usual to read. Apart from the fact that it is quite long, it also has quite a panoply of characters, and a multiplicity of small intermeshing plots. And characters and scenes are richly described, with details that had me re-reading paragraphs in the hope that I wouldn't forget too much.

There's a reminder at the beginning of the book about what had happened to Rebekah Martinsson at the end of the previous one in the series (#2), and I needed that, as I hadn't read the book. In fact I've read #3 and #4 out of order, which is not to be recommended. During this book however we also learn quite a bit more about Rebekah's childhood and the demons she is currently facing.

There's a global aspect to THE BLACK PATH as Kallis Mining attempts to manipulate the politics in African countries for their own benefit. I thought the scenarios showed Asa Larsson's understanding of and interest in the political and economic forces behind globalisation.

Other reviews on MiP
THE SAVAGE ALTAR
4.7, UNTIL THY WRATH BE PAST

Kerrie - I like this series very much, so it's good to hear that you enjoyed this one. I couldn't agree one bit more though that the books are best read in order. Doing so I think gives a much better picture of the characters.

I liked this book, too, and the entire series, although Until thy Wrath be Past is my favorite of the four published thus far.

I liked many aspects of the book, including the information about the Sami culture.

However, the ending was too over the top for me, global shoot-out, lots of deaths, too much to me, although I liked that Asa Larsson showed the self-serving goals of the mining corporation.