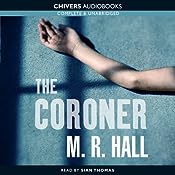 When lawyer Jenny Cooper is appointed Severn Vale District Coroner, she’s hoping for a quiet life and space to recover from a traumatic divorce.

But the office she inherits from the recently deceased Harry Marshall contains neglected files hiding dark secrets and a trail of buried evidence.

Could the tragic death in custody of a young boy be linked to the apparent suicide of a teenage prostitute and the fate of Marshall himself? Jenny’s curiosity is aroused. Why was Marshall behaving so strangely before he died? What injustice was he planning to uncover? And what caused his abrupt change of heart?

In the face of powerful and sinister forces determined to keep both the truth hidden and the troublesome coroner in check, Jenny embarks on a lonely and dangerous one-woman crusade for justice which threatens not only her career but also her sanity.

In this cleverly written start to the Jenny Cooper series (where there are now 4 titles), Jenny is battling her own demons that threaten to bring her to the point where she is unable to do her job.  Investigating the deaths of two young people who were drug-dependent, Jenny has to face the irony of being highly dependent on drugs herself to control her panic attacks and to keep her on an even keel.

The book also establishes Jenny's background as a divorcee with a teenage son living with his father and an ex-husband who appears to be just waiting for her to trip up. And then there is the Coroner's Assistant Alison who was in love with Jenny's predecessor Harry Marshall and doesn't want to entertain any thoughts that he might not have been doing his job as coroner properly.

This was a change from the usual police procedural, seeing events from the coroner's point of view, and I remember that this was a book that everybody was talking about 3 years ago. It is certainly a book I have been meaning to read for some time, and it didn't disappoint. I'm pretty sure I have another title in TBR.

THE CORONER was nominated for the Crime Writer's Association Gold Dagger in the best novel category in 2009.

Kerrie - Thanks for this review. I remember too when this came out and I'm embarrassed to say I've not got to it yet myself. So your fine review is a good reminder to me to get going on it!