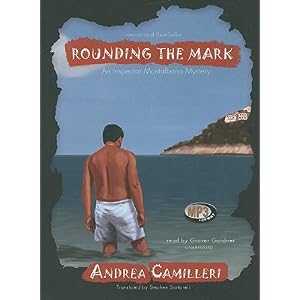 In Rounding the Mark, Inspector Montalbano discovers a corpse while swimming along the Sicilian shore. His pursuit of the cause of death intersects with the inquiry into a hit-and-run accident that claimed the life of a young boy who may have been victimized by human traffickers.

The buying and selling of immigrant children, for slave labor, sex, and as a source of illegal organ transplants, is part of the evil underside of the opening of Europe's borders. That, combined with frustration with his department's repressive handling of security for the G8 summit in Genoa and the corruption among his superiors and the politicians behind them, makes setting anything right seem like an exercise in futility.

Montalbano alternates between despair and steely resolve. When he realizes that he may have inadvertently aided the boy's victimizers, his internal turmoil intensifies.

This novel is a strange mixture of the humorous and the serious. The serious comes from two themes: corruption in the Italian police force particularly at the upper levels, and the increasing trade in human trafficking. At least twice, in the face of his inability to stop the growth in either of these two issues, Montalbano reaches a point of resignation.

He takes delight in small victories though like the solving of mysteries such as identity of the floating corpse that he bumps into on his morning swim. The humour is bound up in Montalbano's personality and the actions he takes such as his decision to tow the corpse to shore using his own swimming trunks, and his tendency to neigh like a horse when he is delighted.

Montalbano comes through as an intuitive detective seeing patterns and connections where others don't, and possessing an ability to replay and freeze-frame events in his own mind, looking for things that don't fit.

The narration by Grover Gardner took some getting used to. He used a variety of Bronx intonations for members of Montalbano's team. It was almost enough to put me off right at the beginning.

Other reviews to check
I've also reviewed AUGUST HEAT
I have a number of the titles sitting on my shelves and on my Kindle and really must make the effort to catch up with Salvo Montalbano more.

Kerrie - I really enjoy this series so I'm glad that you thought there were some good things in this novel. I do have to ask myself why they'd have chosen a Bronx accent for the narration though. I wouldn't have liked that either.