I've decided that for the Crime Fiction Alphabet meme this year I will try to feature books I've read in 2012. 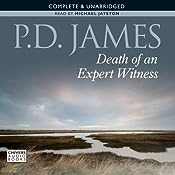 So this week the letter X was a real challenge and I've decided to feature DEATH OF AN EXPERT WITNESS by P.D. James, which I recently re-read  as an audio book.

When a young girl is found strangled in a field, it looks like a routine job for the staff of the East Anglian Forensic Laboratory. But then the senior biologist is found dead in his lab and murder comes closer to home. And Commander Adam Dalgliesh faces the most baffling inquiry of his career.

DEATH OF AN EXPERT WITNESS is the perfect illustration of what took P.D. James to the top of British crime fiction. Characters are clearly defined, plotting is convoluted but tight, motives are hidden, and red herrings abound.  More

Check what others have chosen in Crime Fiction Alphabet this week for the letter X.

Kerrie - Very clever! I see you were thinking laterally and I like it! :-)

I would list Devotion of Suspect X, which I thought was an unusual and good mystery. It delved into an aspect of human psychology, about which I have never read.

And gosh, do I ever need new glasses. I nearly needed a magnifying glass to read this number in the hieroglyphics. It didn't work so on to the next word jumble.

I really like reading crime novels. Never tried an audio book. Would you say listening to the story is better than reading it?

It is a different experience Kyle. I don't listen when I could actually read. I listen when I am driving the car instead of listening to the radio or music. I have a friend who listens as she walks to work every day.