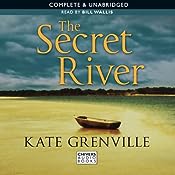 A nominee for the Man Booker prize.

After a childhood of poverty and petty crime in the slums of London, William Thornhill is sentenced in 1806 to be transported to New South Wales for the term of his natural life. With his wife Sal and children in tow, he arrives in a harsh land that feels at first like a death sentence.
But among the convicts there is a whisper that freedom can be bought, an opportunity to start afresh. Away from the infant township of Sydney, up the Hawkesbury River, Thornhill encounters men who have tried to do just that: Blackwood, who is attempting to reconcile himself with the place and its people, and Smasher Williams, whose fear of this alien world turns into brutal depravity towards it. As Thornhill and his family stake their claim on a patch of ground by the river, the battle lines between old and new inhabitants are drawn.
The Secret River joins a tradition of grand historical fiction that stretches from Thomas Keneally's The Chant of Jimmy Blacksmith and Peter Carey's True History of the Kelly Gang.

I should note first of all that this is not strictly crime fiction although it is based on Australia's convict (criminal) past and the main characters are felons, and murder does occur.

What it does do for the reader is give a pretty authentic portrayal of early 19th century New South Wales, a harsh penal colony. It gives a snapshot, in a "no holds barred" sort of way, of a convict, ticket of leave, family who pioneer life on the Hawkesbury River and eventually begin to call New South Wales home.
I say it is authentic because it has all the features of research well done and resonates with what I know of colonial history, but also tells me a little more.
It highlights 19th century beliefs about the aboriginal population whom the authorities did not regard as owning the land because they didn't farm the soil. It illustrates the resultant conflict between the aborigines and the convict/emancipist settlers on what was then the frontier of the colony.

The reading experience is made all the more enjoyable by the excellent narration skills of Bill Wallis.

So why did I read it?
I read almost exclusively crime fiction and decided that this year I would challenge myself to read outside the genre occasionally.
This is the first one I'm managed.
THE SECRET RIVER is the first of a trilogy set in early Australia.

It won the Commonwealth Prize for Literature; the Christina Stead Prize for Fiction (the NSW Premier's Prize); the Community Relations Commission Prize; the Booksellers' Choice Award; the Fellowship of Australian Writers Prize and the Publishing Industry Book of the Year Award.
It was shortlisted for the Miles Franklin Award and the Man Booker Prize and longlisted for the IMPAC Dublin prize.

This is interesting. The book sounds good and your review gives a good overview of it. I too read mainly crime fiction and would like to challenge myself to read outside of that, but there are so many mysteries I want to read, it is hard to pull myself to another area.

I just finished listening to this audiobook a couple of weeks ago too. I thought of you and my other blogging friends who live in Australia. It was a good story and, for me, a good introduction to Australian history. I thought the author did a great job of researching her book.

Thanks Margot. That is just how I thought non- Australians might feel about the book.