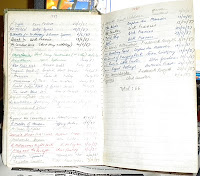 I've based my contributions to Pattinase's Friday's Forgotten Books this year on books I read twenty years ago in 1992.
The little green book (depicted right) where these records are kept is beginning to look a bit battered these days, and needs to be handled with care.

By 1992 I was already addicted to crime fiction and read very little else. But I also didn't read as many books as I do now. In 1992 I read just 87 books whereas this year I am heading for about 50 more than that.
During 1992 I discovered a number of authors such as Ruth Rendell, Colin Dexter, and P.D. James and read multiple titles by them. What all that amounts to is that my options for the rest of this year are rapidly dwindling.

However early in the year I read Jeffrey Archer's A QUIVER FULL OF ARROWS, a collection of short stories published in 1980.

Two friends fall under the spell of a New York beauty - with quite unexpected results. An offhand remark is taken seriously by a Chinese sculptor, and a British diplomat becomes the owner of a priceless work of art. An insurance claims advisor has a most surprising encounter on the train home to Sevenoaks.
The openings to three of this marvellous collection of stories that ends with a hauntingly-written, atmospheric account of two undergraduates at Oxford in the thirties, a tale of bitter rivalry that ends in a memorable love story.

The Kindle version has given this collection a new lease of life.