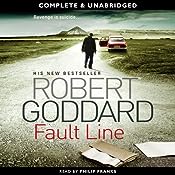 The new race-against-the-clock thriller from the master of the triple cross.

Not all scars are visible. Jonathan Kellaway needs no reminding of that on the verge of his retirement from china clay conglomerate Intercontinental Kaolins. The company has left its mark in pits and spoil heaps around the world. But it has also left a no less enduring mark on some of those who have worked for it, Kellaway included. Its past, as well as its future, is a treacherous place.

So Kellaway is surprised when IK's founder and former chairman, Greville Lashley, sets him a final task before he quits. The academic hired by the board to write the company's history has discovered a gap covering several years in the records of the small Cornish china clay outfit Lashley started with and where Kellaway also began his career. He is despatched to Cornwall to learn what has become of the missing documents.

But the search is a voyage into dangerous waters. A dead friend, a lost lover and a clutch of mysteries from Kellaway's youth in Cornwall and Italy in the late 1960s come back to haunt him -- and to tempt him with the hope that he may at last learn the truth about the tragedies and misfortunes that blighted those years. It is a truth that has claimed several victims before. If he pursues it hard and long enough, he may only add himself to the list.

But pursue it he must. Because the truth, he belatedly realizes, is the secret that has consumed his life. This time -- this last time -- he will not stop. Until he has found it.

Even though many of his stand alone novels follow the same pattern, I have always found Robert Goddard a reliable "read" and FAULT LINE is no exception.

First of all it seems that the pattern works: often, as in FAULT LINE, a triple timeline/scenario. In this case events that happened about half a century ago; then a step forward in time to about 20 years ago; then a crisis in recent times that throws a different light on those distant events. This plot strategy gives Goddard plenty of scope for character development and for throwing in elements of doubt. The recent events allow for threatening situations, with secrets that some characters don't want revealed. And just when you think you've got it all sorted, the plot twists again.

The stories become versions of family sagas with mysteries and sometimes murders thrown in. And Goddard manages the historical settings so well.

The narration by Philip Franks in this audio version is superb.