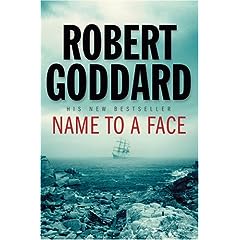 I listened to this, downloaded from audible.com, read by Andrew Wincott, nearly 11 hours.
Published in 2007.

Synopsis:
In 1707, the HMS Association was lost off the Isles of Scilly with no survivors. Thirty years later, an admiralty clerk is tasked with a secret mission.
And 200 years after that in 1996, a dive on the wreck results in a fatal accident. Ten years later Tim Harding agrees to return to Cornwall, to go to an auction, to bid on a low value lot, as a favour for his employer and friend Barney Tozer. Seemingly disconnected events come together to form a trail of deceit, murder and greed, activated when the auction lot is stolen.

The plot of NAME TO A FACE comes close to stretching the bounds of credibility. I usually enjoy Robert Goddard's books, and I really did enjoy this one, but there felt as if there was at least one plot element too many. It almost felt as if Goddard had painted himself into a corner, and had to pull another rabbit out of the hat in order to bind the plot together coherently. Part of the problem was the multiple time frames already described in the synopsis. But then Goddard introduced another, a legend from the 12th century, and I really felt he was clutching at straws. What I normally enjoy in Goddard novels, the juxtaposition of the past with the present, just felt overdone.

It took a long time to finally tie everything off, and even then a murderer goes free, and another escapes retribution. I was ready for it finish well before it did.

NAME TO A FACE is Robert Goddard's 19th novel, in a career that began in 1986. See the full list below courtesy Fantastic Fiction.

My other mini-reviews of Goddard novels.

I think the quality of Robert Goddard´s work varies a lot. Some of them are good, others just ... long.

this is the first .. just long.. one that I have met Dorte. It got long to listen to, and when the plot added yet another strand, I began to wonder how many more twists and turns it would take. Perversely, I still quite enjoyed listening to it

I can just about cope with three strands of a plot but that is my limit. I don't mind one flashback or backstory but when we are given two I am at the limit of my concentration.

I agree Norman. As I said, I think he painted himself into a corner and realised/thought he needed just a bit more to finally explain the why of the original murder. It is a pretty thin why at that.