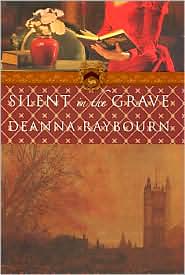 In the tradition of the Grey family, Sir Edward Grey did not make old bones, but his collapse at the age of 34 on the floor of his music room in front of guests was totally unexpected, and at the time his wife Lady Julia accused him of playing a prank. It was one of the guests, Nicholas Brisbane, who pointed out that Edward was convulsing.

The year is 1886, the setting Victorian London. Julia Grey is the ninth child of Lord March, married over five years before to her childhood sweetheart.

In compliance with conventions made popular by Queen Victoria herself, the clocks are stopped at the moment of Sir Edward's death, everything is swathed and wreathed in black crepe, and Julia begins a year of mourning, wearing unrelenting black and avoiding "entertainments".

Edward had become increasingly unwell during the final year of their marriage, but even so Julia is unprepared for what Nicholas Brisbane comes to tell her a few weeks after the funeral: that her husband had feared for his life and had hired Brisbane to protect him, and that he thinks Edward was murdered. Julia discounts Brisbane's advice until just a year after Edward's death when she makes a startling discovery.

It was this book that I had in mind the other day in my post The Dangers of Genre Mixing, for this novel mixes history, mystery, and even more elements including the paranormal, and accepted social mores.
In addition SILENT IN THE GRAVE was Raybourn's debut novel, and I think she struggled to get the right mix of history and mystery. There is a lot of "setting of the scene" in the first year of the story, and the mystery element doesn't really get a chance for the first 80 pages until Lady Julia makes a discovery that leads her to taking Brisbane up on his earlier suggestion.

For me the first half of the novel was frustratingly slow going: it took me well over a week to read. I had meant to have it read in time for an online discussion at oz_mystery_readers and have had to play a sort of catch-up with the discussion. Even so the revelations of the last 100 pages or so caught me by surprise, and the finally revealed identity of Sir Edward's murderer was a character whom I had earlier discounted.

Lady Julia is at times rather self-centred, impulsive and vacuous, while Nicholas Brisbane is brooding control-freak in an almost Heathcliff fashion. They make an unlikely investigative team. But this partnership continues in two more novels.
1. Silent in the Grave (2006)
2. Silent in the Sanctuary (2008)
3. Silent on the Moor (2009)

At a hefty 500+ pages, SILENT IN THE GRAVE is a "solid" read in more than one way. The physical structure of the book actually contributes to its length: there are forty one chapters, and a dividing page between each chapter. Each chapter page has a classical quotation, the significance of which at times escaped me, while at other times they seemed particularly apt.

SILENT IN THE GRAVE was shortlisted for an Agatha Award for Best First Novel in 2007
Read the first chapter online at Amazon.

Reviews by others
You'll find that my friend Bernadette at Reactions to Reading didn't like it at all, Material Witness says if she had just gone by the blurb on the back she never would have started it, while Marg over at Reading Adventures was another who really enjoyed it. Lesa Holstine says "one of the best historical mysteries I've read in a long time", and Books and Musings from DownUnder is a real Raybourn fan.

"make old bones" - I don´t think I´ve ever heard that one before.

I haven´t read the book, but after the first few lines of your review, I thought ´poison´. You don´t have to spoil the pleasure for anyone by commenting, though.

Glad you enjoyed it more than I did Kerrie and that you were surprised by the ending. Makes all the difference I think.

I did really enjoy this, mainly because of the chemistry between Brisbane and Julia! I am looking forward to reading the third one soon!

I did also mean to say that I was a bit disappointed to be offline during the discussion of this book at ozmystery readers because I had already read this! Never mind. Hopefully there will be something else I can participate in again soon.