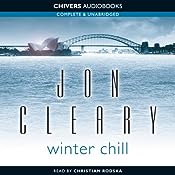 It is 3.30 a.m. The Sydney monorail performs its endless circuit like a pale metal caterpillar - all for the benefit of one dead passenger.

Elsewhere in the city’s bleak midwinter, Darling Harbour buzzes to the sound of 1,000 American lawyers attending an international conference. And that means 1,000 opinions as to who killed their president. Two bodies later, and the more Scobie Malone fillets the heart of the city’s legal profession, the more he cuts into an intrigue of international proportions....

Against the background of  an international conference for lawyers being held in Sydney, an American lawyer who turns out to have been born in Australia is killed. His body is discovered on the monorail and then the security guard who discovered the body is murdered.

There's quite a bit of human interest in the story too. Scobie Malone has two teenage children and his wife discovers she has breast cancer. Scobie Malone is a principled detective who believes in thorough investigative techniques.

A good story made even better by the excellent narration of Christian Rodska.Quite an intricate plot.

In 2004 Cleary (1917-2010) won a Ned Kelly Award for best novel for the last of the Scobie Malone books DEGREES OF CONNECTION. He also won an Edgar Award for Best Novel in 1975 for a non Malone novel PETER'S PENCE.

Jon Cleary was probably better known for the fact that he wrote THE SUNDOWNERS.

Wikipedia has a good listing of the Scobie Malone books with single sentence plot outlines.


Cleary once stated that, "There's more than a bit of me in Scobie. We both come from fighting Irish stock, we're both from Erskineville, the wrong side of the tracks, and both of us slugged our way up." Malone was a Catholic family man with rigid principles who mostly worked in Sydney, although his adventures occasionally took him overseas.
Other regular characters in the series included:

Sadly I have only one or two of this series, and that really is something I should correct.