You might have noticed that I haven't made a lot of progress in trimming this huge pile, but still the books arrive: some from publishers in hope of a review, and some that I have requested from the library, because I have seen a good review, or even a mention of it, somewhere.

This is a library book, requested because I saw a mention of it on Crime and mystery fiction Friend Feed.

Death has come twice to Ravenbank, a remote community in England’s Lake District, each time on Hallowe’en. Just before the First World War, a young woman’s corpse was found, with a makeshift shroud frozen to her battered face. Her ghost – the Faceless Woman – is said to walk through Ravenbank on Hallowe-en. Five years ago, another woman, Katya Moss, was murdered, and again her face was covered to hide her injuries.

Daniel Kind, a specialist in the history of murder, becomes fascinated by the old cases, and wonders whether the obvious suspects really did commit the crimes. He spends Hallowe’en at a party in Ravenbank – only to find death returning to this beautiful but isolated spot. Once more, the victim is a woman, once more her damaged face is shrouded from view.

The latest horrifying murder presents DCI Hannah Scarlett, head of the Cold Case Review Team, with the toughest challenge of her career. Is the case linked to the two earlier killings, and if so, what is the connection? Hannah has never had such a huge personal stake in solving a case, and it comes at a time when her private life is thrown into turmoil.

Hannah and Daniel join forces as they try to discover who killed the Faceless Women. But before the shocking puzzle is solved, both of them must confront ghosts from their own past, as well as the ghosts of lonely and mysterious Ravenbank.

GOOD AS GONE, Douglas Corleone
This is an ARC forwarded to me by Pan Macmillan Australia. The book is not due for release in Australia until September 2013 and there is an Amazon Kindle version available for pre-order.

The paper blurb that accompanied the book says that it is a "lightning fast abduction thriller that races through the streets of Europe in a style reminiscent of the Jason Bourne and Taken films."

THE HANGING, Lotte and Soren Hammer 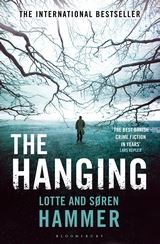 This is a review copy sent to me by Bloomsbury Publishing
The authors are a sister and brother from Denmark, and the book is marketed as "the first in an exciting new six-part crime series."
The book was published this month.

Publisher's blurb
On a cold Monday morning before school begins, two children make a gruesome discovery. Hanging from the roof of the school gymnasium are the bodies of five naked and heavily disfigured men. Detective Chief Superintendent Konrad Simonsen and his team from the Murder Squad in Copenhagen are called in to investigate this horrific case - the men hanging in a geometric pattern; the scene so closely resembling a public execution. When the identities of the five victims and the disturbing link between them is leaked to the press, the sinister motivation behind the killings quickly becomes apparent to the police. Up against a building internet campaign and even members of his own team, Simonsen finds that he must battle public opinion and vigilante groups in his mission to catch the killers.

A nerve-wrenching look at justice and retribution, The Hanging is a spectacular crime tale straight from the heart of Scandinavia.

I'm also reading/ or planning to read these novels by Aussie authors
ROTTEN GODS by Greg Barron
THE MIDNIGHT PROMISE by Zane Lovitt
and an ARC of WATCHING YOU by Michael Robotham
Posted by Kerrie at 8:00:00 am

Kerie - Oh, I can't wait to read The Frozen Shroud. I hope you'll like it.