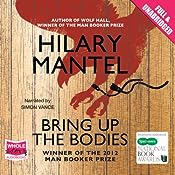 The sequel to Hilary Mantel's 2009 Man Booker Prize winner and New York Times bestseller, Wolf Hall delves into the heart of Tudor history with the downfall of Anne Boleyn

Though he battled for seven years to marry her, Henry is disenchanted with Anne Boleyn. She has failed to give him a son and her sharp intelligence and audacious will alienate his old friends and the noble families of England. When the discarded Katherine dies in exile from the court, Anne stands starkly exposed, the focus of gossip and malice.

At a word from Henry, Thomas Cromwell is ready to bring her down. Over three terrifying weeks, Anne is ensnared in a web of conspiracy, while the demure Jane Seymour stands waiting her turn for the poisoned wedding ring. But Anne and her powerful family will not yield without a ferocious struggle. Hilary Mantel's Bring Up the Bodies follows the dramatic trial of the queen and her suitors for adultery and treason. To defeat the Boleyns, Cromwell must ally with his natural enemies, the papist aristocracy. What price will he pay for Anne's head?

BRING UP THE BODIES gives a fascinating insight into Henry VIII's court and in particular into the way Thomas Cromwell, "Master Secretary", manipulated the families around the throne. Cromwell is as much concerned with keeping himself on top as with keeping Henry VIII happy.  The novel focusses on the period of 1535-6, when Anne's attempts to give Henry a male heir fail, and Henry's dissatisfaction, coupled with rumour and innuendo, result in her trial and eventual execution.

I am fairly familiar with Tudor history but this gives the reader a detailed "insider" point of view. I found it impossible to pick "real truth" from fiction, and the characters really do come to life. It is a wonderful way to learn history, or at least to get a commentary on it. The events described will send you off to check the novel against historical fact. Mantel's explanation of what motivates Thomas Cromwell makes you think twice.

Simon Vance does an excellent job of the narration.

You will notice that I am counting this as a non-crime-fiction title, although you could argue that an immense amount of crime is committed.

Read some articles and reviews

Kerrie - I do admire Mantel's skill at setting a historical context while at the same time telling a good story. Glad you enjoyed this.

This and Wolf Hall are two of my very favourite books - can't wait for the 3rd in the trilogy.