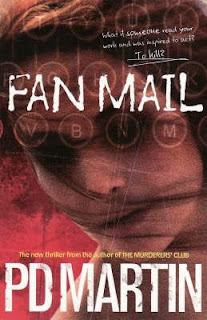 Sophie Anderson is a Melbourne profiler who featured in two earlier titles BODY COUNT and THE MURDERER'S CLUB. What makes Sophie stand out from the rest is her sixth sense which gives her visions, particularly images, related to the cases she is working on. Sometimes she sees events from the point of view of the perpetrator, sometimes from that of the victim. The visions are usually accompanied by dizziness, and can sometimes be triggered intentionally, but more often than not occur without warning. Sophie has been working for the FBI at Quantico and is now moving to the American West Coast so that she can get more "in the field" work. Only one person that Sophie has worked with knows of her visions. It is not something she generally wants her colleagues to be aware of.

She thinks her "visions" may come more reliably, or that she will be able to channel her abilities, if she can visit the scene of the crime. Her current role in the Behavioral Analysis Unit at Quantico is very desk bound, hence the transfer to the FBI agency in Los Angeles.

On her last day at Quantico Sophie is asked to conduct a tour for a novelist who writes rather gruesome crime novels with detailed crime scenes, but now the novelist has been found murdered - by someone who has copied the method from her latest novel. So begins Sophie’s first case with Los Angeles FBI Agency. She quickly finds out that there has been an earlier case – someone is killing crime fiction writers and using their own scenarios as a blueprint.

FAN MAIL takes up where THE MURDERERS' CLUB, the previous title in this series, left off. There is no doubt in my mind that, despite back-fill given by the author, the reader is in a better position to appreciate the continuity by having read the earlier title. Make no mistake though, the reader can treat FAN MAIL as a stand-alone, but I think Martin is on dangerous ground here if she stretches the threads in the series too far. She will need to decide whether, in future books, she expects readers to have read previous titles in the series, or just how important the back-fill is to the understanding of the current action.

I feel that PD Martin has come a long way in a short time in her skill as a writer. She is obviously increasing her understanding of the field with considerable research, and at the same time her control of the threads of the stories is very masterful. I thoroughly enjoyed FAN MAIL and look forward to the next in the series.

PD Martin lives in Melbourne, Australia and developed a passion for crime fiction and story telling at an early age. This interest was backed up with formal education through a Bachelor of Behavioural Sciences (with majors in psychology and criminology) and a Postgraduate Certificate in Professional Writing (creative writing).