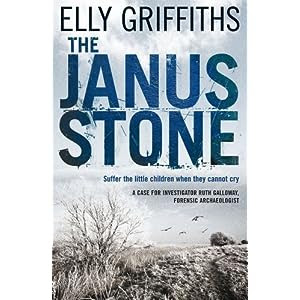 Publisher's Blurb
Ruth Galloway’s expertise is called upon when builders, demolishing an old house in Norwich, uncover the bones of a child – minus the skull – beneath a doorway. Is it some ritual sacrifice or just plain straightforward murder?  DCI Harry Nelson investigates. The house was once a children’s home. Nelson traces the Catholic priest who used to run the place. He tells him that two children did go missing forty years before – a boy and a girl. They were never found. When carbon dating proves that the child’s bones predate the home and relate to a time when the house was privately owned, Ruth is drawn ever more deeply into the case. But as spring turns into summer it becomes clear that someone is trying hard to put her off the scent by frightening her to death …

This is #2 in Elly Griffiths' Ruth Galloway series. I was looking forward to it as I really enjoyed #1, THE CROSSING PLACES

Ruth Galloway is Head of Forensic Archaeology at the University of North Norfolk, an acknowledged expert – on bones, decomposition and death. In THE JANUS STONE she works again with Detective Chief Inspector Harry Nelson, and her old friend the Druid Cathbad plays a strong role, as well as a new friend Max Grey. Nelson is in charge of the Serious Crimes Unit. The investigation of discovered bodies comes under his brief, and of course when they are part of an archaelogical investigation, then Ruth is also called in. In addition, in THE JANUS STONE, the discovery of a child's body in a building site is particularly poignant for both Ruth and Nelson.

This is a novel with mystery on a number of levels. Add to that some really well drawn characters including Father Hennessy and Sister Immacolata who both worked at the site when it was a children's home.

The structure of the novel is interesting. Each chapter is prefaced with what seems to be a diary entry, beginning at the beginning of June. Here is a taste:


1st June, Festival of Carna The house is waiting. It knows. When I sacrificed yesterday, the entrails were black. Everything is turned to night. Outside it is spring but in the house there is a coldness, a pall of despair that covers everything. We are cursed. This is no longer a house but a grave. The birds do not sing in the garden and even the sun does not dare penetrate the windows. No one knows how to lift the curse. They have given in and lie as if waiting for death. But I know and the house knows. Only blood will save us now.

The diary entries continue on Roman feast days throughout the month of June, detailing sacrifices made to various Roman gods. There are several candidates in the story for who the writer could be, and the entries add to the sense of an impending climax.
When the climax comes it brings great danger to Ruth.

There isn't the sense in THE JANUS STONE of Ruth and Nelson working together as they did in THE CROSSING PLACES. However the story is still a very satisfying one. I like the development of the main characters and look forward to finding out where their ongoing relationship takes us in the next in the series, already published, THE HOUSE AT SEA'S END.

One of the odd features of Elly Griffith's style is that the narrative is almost always written in the present tense.

On impulse Ruth goes over to the box containing the other evidence bags from the site.


The tactic of always narrating in present tense has a peculiar effect. It makes the reader feel like a bystander listening to stage directions, as if the author is watching her characters and describing their actions for us in real time.

This review is my 400th on MYSTERIES in PARADISE.
I'm including THE JANUS STONE in my lists for various challenges: Cruisin' thru Cosies Reading Challenge, e-book challenge, and British Books Challenge

Kerrie - I like Ruth Galloway's character very much, so I'm glad you've enjoyed both of these books.

Interesting thing you've brought up about using the present tense. I hadn't thought about it but what you say makes sense. It does have that effect of making the reader feel "backstage." And normally, I'm not as much of a one for use of the present tense, but it works here...

I really enjoyed this book and I'm so looking forward to reading the next in the series. I love these characters!

Congratulations on your 400th review - and what a fine book to celebrate it with! I am looking forward to her third.

Congratulations! 400 is quite a milestone.

I'm reading this one right now and like it better (so far) than the first.