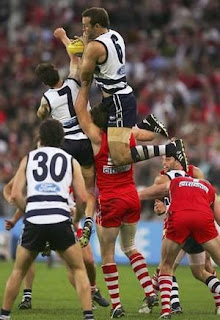 It appears in my records in September 1993. It also appears to have been published in 1993.

It is subtitled A footy murder mystery and I'm pretty sure the setting was an AFL (Australian Football League, i.e. Australian rules football) match at the MCG. (Melbourne Cricket Ground, "home" of the AFL)

Both the authors Peter Fitzpatrick and Barbara Wenzel appear in the National Library archives as having written separate novels, but DEATH IN THE BACK POCKET was their only collaboration, nor do they, separately seem to have written any other crime fiction.

After an hour's research, I am no wiser about the plot or the cover. Drat!

So, here's your chance. Tell me about any murder mystery title you know of set at a sports match.
I think there is a series set at baseball matches isn't there?

One I read in 2008 set around soccer was BENEATH THE BLEEDING by Val. McDermid.
Tony Hill is in hospital after being attacked by a mad machete wielding prisoner. Another patient in Bradfield Hospital is Bradfield Victoria's star midfielder, quickly dying from a poison for which there is no antidote. It is obvious he has been murdered but why?
Then a terrorist bomb explodes at the Bradfield football stadium killing dozens. DCI Carole Jordan seethes as she is forced to hand over the bombing investigation to a specialist terrorist investigation team. Not that she doesn't have enough to keep her occupied. Tony Hill suspects that the bomber is no terrorist, and then one of their own dies from poisoning.

Then there was Louise Penney's DEAD COLD
#2 in the Armand Gamache series. In the little Canadian village of Three Pines another death has occurred. A female spectator, the hated CC de Poitiers, has been electrocuted while out on the ice watching the annual Boxing Day curling match.

What can you think of?

Kerrie - There's a cricket match in Dorothy Sayers' Murder Must Advertise. And Michael Balkind's Reid Clark novels take place around golf matches. Oh, and then there's Dick Francis' Sid Halley novels. Some of them take place at horse racing events, although I'm not sure you'll count those as sporting matches...

I'm sure I have read a mystery set at the Wimbledon finals but I haven't got a clue who wrote it or what it was called.

There are some tennis ones listed here

DEATH ON THE CENTRE COURT - GEORGE GOODCHILD - set at Wimbledon

I am not sure it is set AT a sports match, but in Elizabeth George´s Playing for the Ashes cricket is very important (read it several years ago).

In my own "The Cosy Knave" a murder takes place during a football game, but that was probably not what you were thinking of ;)

Kerrie: You have asked about sports, one of my other passions. In my spare time I have been writing a sports column for 33 years.

With regard to mysteries there is a series by the Canadian mystery author, Alison Gordon, about professional baseball. Alison was the first woman sportswriter to cover regularly a major league sports team in Toronto in 1979.

Her character Kate Henry is a sports writer solving mysteries.

One of the mysteries, Prairie Hardball, is set in Saskatchewan and features a baseball banquet which, in real life, I was in attendance.

Lastly, different countries use different language. In North American we go to baseball or football games rather than matches.

Thanks for the chance to talk sports.

Thanks for the suggestions everyone. Perhaps Alison Gordon was the one I was thinking of, Bill, connected to baseball. And I should have known the Peter Temple one!

I read one called Sherlock Holmes at the 1902 Fifth Test about a cricket match between English and Australian teams. By the end I think I almost understood cricket. Then I forgot, and reading about a match in Robert Goddard's recent Long Time Coming left me bewildered.

Good question, Kerrie.
Off the top of my head:

Aaron Elkins and his wife Charlotte write a series of golf-related mysteries.

And of course Dick Francis wrote several mysteries set at the race track: the sport of kings.

Over at Amazon if you search Mysteries - sports it turns up 298 results including some collections by Otto Penzler.

My favorite is Jasper Fforde's "Something Rotten" where Thursday Next and the Swindon Mallets compete in the 1988 Croquet Superhoop final. Go Mallets!

My expertise is always in vintage mysteries so here's my list. Most are from the 30s and 40s, with the Lovesey book being the most recent (1970s).

Cortland Fitzsimmons, an American writer of very mediocre mysteires during the 1930s, specialized in sports mysteries.

70,000 WITNESSES - football player poisoned during a game. But how?

Herbert Adams wrote several golf mysteries featuring his series detective Roger Bennion. Some of them are THE GOLF HOUSE MURDER, DEATH OFF THE FAIRWAY, THE BODY IN THE BUNKER, THE NINETEENTH HOLE MYSTERY, etc.

And some more unusual sporting choices:

THE POISON FLY MURDER by Harriet Rutland (fly fishing) This one is reviewed at my blog. Very hard to find book, but a brilliantly conceived story.