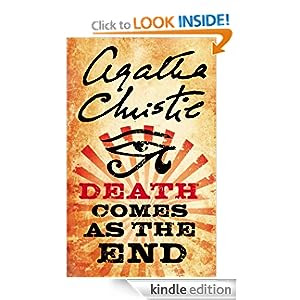 Plot synopsis (from the Kindle edition)

A serial killer mystery laid in ancient Egypt 4000 years ago. Into the household of Imhotep, the Mortuary Priest, comes the beautiful Nofret.
The household, outwardly at peace, has at its core, in the words of the thoughtful scribe Hori, a rottenness that breeds from within.
With Nofret comes anger, jealousy, quarrels and finally death. Human passions were the same in 2000 BC as they are today. The fussy and pompous Imhotep, the timid Yahmose, the quarrelsome Sobek, and the malicious ‘poor relation’ Henet – all are types to be met with now in 2000 AD. Agatha Christie’s experiment is as ingenious and baffling as always, and ends with a climax which few will anticipate.

I think I have rarely enjoyed a Christie title more than this one. But I don't remember ever reading it before and that may be the clue to why it felt so fresh.

I don't remember whether Christie ever gave a historical setting like this to any other novel.
She tells us in an "author's note" at the beginning where the plot and setting came from.


The action of this book takes place on the West bank of the Nile at Thebes in Egypt about 2000 BC. Both place and time are incidental to the story.

Any other place at any other time would have served as well: but it so happened that the inspiration of both characters and plot was derived from two or three Egyptian letters of the XI Dynasty, found about 20 years ago by the Egyptian Expedition of the Metropolitan Museum of Art, New York, in a rock tomb opposite Luxor, and translated by Professor (then Mr) Battiscombe Gunn in the Museum’s Bulletin.

When Imhotep returns to his family in Thebes with his new concubine Nofret he unleashes forces for evil within the family that have lain dormant for years.
As the scribe Hori says to Renisenb, recently returned to the family home after the death of her husband, and having been away for 8 years:


You do not understand, Renisenb. There is an evil that comes from outside, that attacks so that all the world can see, but there is another kind of rottenness that breeds from within–that shows no outward sign. It grows slowly, day by day, till at last the whole fruit is rotten–eaten away by disease.

When Imhotep leaves again for three months, leaving Norfret behind, the forces are unleashed and the murders begin. One after another, family members whom the reader suspects of the first murder are themselves attacked or killed, until there are so few left to suspect. And then Christie plays her trump card.

I saw a fellow blogger comment the other day about how this was the best Agatha Christie title she had ever read, and I can understand why. The plot and whodunnit aspects are engrossing.

Kerrie - I'm so glad you liked this one. It is, so far as I know, the only historical mystery Christie wrote, and I always admired her for branching out in this direction. And successfully, too...

I love this book too Kerrie and have re-read it loads of times. It's not critically acclaimed and I know people who absolutely hate it but it is one of my favourites as it portrays so well pure evil.

I have recently bought a copy of this book, but I'm reading the Christies in chronological order, so it will be a while before I get to it.

Great review of and old jewel! Thank you for sharing it with us