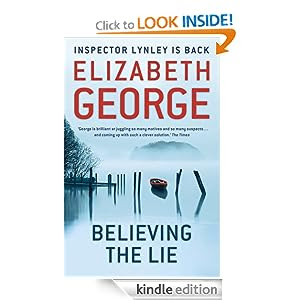 Detective Inspector Lynley is approached by business magnate Bernard Fairclough for a confidential review - not a formal investigation - of the circumstances of his nephew's demise. The coroner's verdict is accidental death.
Still grieving for his murdered wife, Lynley has personal reasons for welcoming a spell away from London. He heads to the wild beauty of the Lake District, with Deborah and Simon St James to provide cover for his inquiries.
Barbara Havers, back at base, makes her own unique contribution to the case, distracted only by Isabelle's ambitions to improve her Detective Sergeant's appearance. When he comes to know the various members of the extended Fairclough dynasty, Lynley finds many possible motives for murder, and uncovers layers of deceit and betrayal that expose the lies at the heart of the Cumbrian community.

First of all. let me say, this is a long book, but I forgive the length, although of course by the end I was anxious to have the various plot lines resolved. It is a book that begins sedately enough but by the last pages is fairly galloping along.

Despite the number of books in the series that have intervened, it is only 8 months since Thomas Lynley's wife Helen was murdered (WITH NO ONE AS WITNESS publ.2005). Tommy has spent much of that time in a fugue, coming to terms with his loss, but 4 months ago he entered into a relationship with his immediate boss, Acting Detective Superintendent Ardery. Public knowledge of this relationship could be career-ending for either or both of them.

We are used to the construction of the modern detective novel: two or more plot lines beginning separately but, from the omniscient view of the reader, inevitably destined for convergence like railway tracks coming into the station. Other plots intersect with the main ones rather like spider webs. But it seems to me that in BELIEVING THE LIE Elizabeth George has taken this plot structure rather a step further. There's a caboose or two blundering around the network, destined to rather clumsily bang into the main trains. Zed Benjamin, rookie journalist for The Source, is one of those cabooses, on the track of a story that his demanding editor has given him only partial information for.

DI Thomas Lynley is asked to go to Cumbria to investigate a death to make sure it wasn't murder. His assignment is a favour at a higher level and he's meant to keep it secret, even from his boss. He decides to ask his friends Deborah and Simon St. James to accompany him to assist in some incognito investigation and thus he lets Deborah St. James loose into the mix with eventually rather disastrous consequences.

There are a couple of themes underlying the whole plot structure.
One links to the title: the lies that characters promulgate, the lies they believe, and the ones that fool no-one.

A second concept, surrogacy, is introduced by Deborah St. James herself, desperate to have a baby, but unable to carry a child to full term. She thinks she recognises, in the wife of one of the people under investigation, a kindred spirit. In actual fact Deborah runs a line of interference into the investigation, rather than contributing positively.

A third theme is that of love and relationships. There are some very damaged, interesting, but not necessarily likeable, people in the cast of characters. Most of them are strongly drawn, as are the threads of the relationships between them.

Although Lynley's long time detective partner, Barbara Havers, is not meant to be assisting him in this investigation, he of course enlists her assistance in research, and through her other plot elements emerge. At the instigation of Activing Detective Superintendent Ardery, Barbara is having a makeover: her teeth have been fixed, and her hair and clothing are next. But will it last?

So, in the long run, for me, a satisfying read, one that gave me plenty to think about. And a book to which, without doubt, there will be a sequel.

You might also like to check these posts:
Other Elizabeth George reviews on MiP
CARELESS IN RED (#15 in the series)

Glad you liked it Kerrie. This one wasn't really for me although I do still like the Havers character.

I find it a pity that the series has got so slow and plays slightly unfair games with the readers in its various obscurities. There are lots of good things about this author, but I wish she'd move the Lynley plot along faster, & also keep her books to under 400 pages (or even 300 pages!). Some books need the length but I feel that these are too padded.

I'm glad you enjoyed this book, in spite of it's length. I refrained from reading these, simply because my husband was a detective and the wife always gets murdered, bad Karma? I don't know I just didn't want to be one of the statistics. And it always kills me when the widower mourns his wife, and yet manages to get into a relationship within the year... I don't know maybe I'm just weird.

Enjoyed you review, Kerrie. I wish I could say the same for the George books post-Helen's death. I just haven't been able to read any of these since George dropped that bomb on us. And I have tried....