For many of my contributions this year to Pattinase's Friday's Forgotten Books I am focussing on the books I read 20 years ago in 1992. By then my reading diet was almost exclusively crime fiction.
So my recent posts for this meme have largely been about authors that I "discovered" in that year. 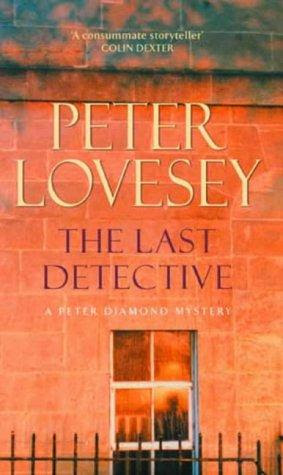 In 1991 Peter Lovesey published the first in his very successful Peter Diamond series and I caught up with it in 1992.
It also won the Best Novel in 1992 Anthony Awards.

Detective Superintendent Peter Diamond is the last detective: 'not some lad out of police school with a degree in computer studies' but a genuine gumshoe, given to doorstopping and deduction.
So when the naked body of a woman is found floating in the weeds in a lake near Bath with no-one willing to identify her, no marks and no murder weapon, his sleuthing abilities are tested to the limit.
Struggling with a jigsaw of truant choirboys, teddy bears, a black Mercedes and Jane Austen memorabilia, Diamond persists even when 'the men in white coats' decide they have enough evidence to make a conviction. It's just as well: for despite disastrous personal consequences, and by following the real clues hidden amongst Bath's historic buildings and intertwined with its literary past, the last detective exposes the uncomfortable truth ...
Peter Diamond series
1. The Last Detective (1991)
2. Diamond Solitaire (1992)
3. The Summons (1995)
4. Bloodhounds (1996)
5. Upon A Dark Night (1997)
6. The Vault (1999)
7. Diamond Dust (2002)
8. The House Sitter (2003)
9. The Secret Hangman (2007)
10. Skeleton Hill (2009)
11. Stagestruck (2011)
12. Cop to Corpse (2012)
13. The Tooth Tattoo (2013)

Check out my reviews for

A series I really like a lot. I still have a couple I've "saved" for a rainy day, and I should just go ahead and read them!