Forgotten Book: THE ASSIZE OF THE DYING, Ellis Peters 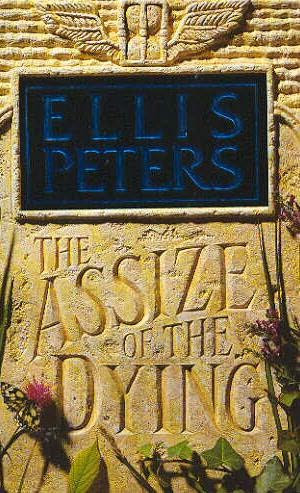 For many of my contributions this year to Pattinase's Friday's Forgotten Books.  I am focussing on the books I read 20 years ago in 1992. By then my reading diet was almost exclusively crime fiction.
So my recent posts for this meme have largely been about authors that I "discovered" in that year.

This book, written originally under her "real name" of Edith Pargeter, was published by Heinemann in 1958 and then republished in 1991 with Ellis Peters named as the author, obviously to capitalise on the popularity of the Cadfael books and television series. It consisted of a pair of longish short stories.

A pair of perfect crimes…

When Louis Stevenson is found guilty of murder, he leaves the dock loudly proclaiming his innocence. And he delivers, too, a chilling invitation to the four men responsible for his conviction: ‘You four, I summon to meet me at the time appointed, at the Assize of the Dying.’

The meaning of the sinister words becomes clear almost immediately with two unexpected deaths. And a young couple, convinced that an innocent man has been wrongly condemned, determine to unmask the real murderer—before he strikes again.

Assize of the Dying is followed by a second novelette, Aunt Helen. Murder is committed, too, in Aunt Helen, a story of blind obsession and psychological suspense that starts with what looks suspiciously like the perfect crime....

I've never found the Edith Pargeter titles as enjoyable as the Cadfael ones which appeal to reader's desire for a historical whodunnit. And of course we remember Ellis Peters each year with the awarding of the CWA Ellis Peters Historical Award (formerly a Dagger).


Writing as Edith Pargeter and Ellis Peters she was indeed a prolific writer, but did you know she also wrote another 6 books as Peter Benedict, Jolyon Carr, and John Redfern?

Kerrie - An excellent choice for the forgotten book series. I'm not nearly as familiar with Pargeter/Ellis' "non-Cadfael" books as I am with the Cadfael series. I really ought to dip into them a little...

Her historicals are well worth checking out and I've always had a fondness for her Inspector Felse mysteries.