I have 4 books up for grabs in Book Blogger Appreciation Week.
They are all crime fiction books that I have reviewed here on this blog. I've hyperlinked the titles so you can read more about them before you list your choices.

The rules are simple. Just leave a comment, tell me where you live (country), and list 2 books as your choices. You should also leave your disguised email address - e.g. Jenny at gmail.com - so that I have a chance of contacting you if you are a winner. (although I will come back and comment on this post and have a dedicated post to announce the winners.) 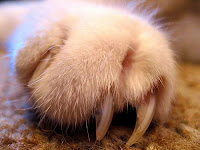 It would be nice if you would Tweet about it - but you don't have to (put BBAW in your Tweet).
I will announce the winners on 20 September.

Method of selection will be by the cat's paw:

THE CLEANER by Brett Battles.
a fast moving thriller, in a style made popular by Alistair Maclean, Jack Higgins, Hammond Innes, and more recently Matthew Reilly. Not really my favourite genre, the story at times strained the bounds of credibility. Nevertheless the plotting is tight, the tension sustained, and the central scenario believable.

This book is only for Australian or New Zealand participants.

ABOUT FACE by Donna Leon

ABOUT FACE is #18 in Donna Leon's Brunetti series. As always, I am not sure whether to advise a new reader to start with this book, or whether to try to do a little "back reading". ABOUT FACE is not the best in the series (my rating 4.4), and I found the last 50 or so pages a bit too slow. On the other hand the series is so good, one of my favourites, that I have no hesitation in recommending that you try them. If you've ever been to Venice, then you'll know something of the magic of the city, and enjoy seeing it through Guido Brunetti's eyes. Brunetti's wife, English professor Paola, is a feisty woman, Guido's personal social conscience, more than willing to challenge his decisions. She does not let us down in ABOUT FACE.

ABOUT FACE is smaller format, so I'll send it anywhere in the world.

FROM DOON WITH DEATH was Ruth Rendell's first novel, and is the beginning of the Inspector Wexford series.

In six years of married life Ronald Parsons had never come home to an empty house. Margaret was always there, and after only an hour and a half of waiting, he approached Mike Burden who lived just down the road. Burden's new boss Chief Inspector Reg Wexford is of the opinion that Margaret has bolted, but he sets Burden to doing the usual checks, with no real results. Two days later Margaret's body is discovered in the woods on the outskirts of town, and that's when it becomes obvious that Margaret had a life, a history, that her husband knew nothing about.

This book is a double-banger as it also includes A NEW LEASE OF DEATH. it is in the small format, so I'll send anywhere in the world.

Jack Reacher thinks he knows a suicide bomber when he sees one.Twenty years ago he learnt a list of behavioural indicators from an Israeli army captain. It is a set of twelve bullet points for male suspects, and eleven for women. Riding the New York City subway at two o'clock in the morning he reckons he is looking at one - a female suicide bomber, that is. He's worked his way through the bulleted list and she fits. And then the woman realises that he has spotted her.

This is the larger format so it is available only to Australian or New Zealand participants.

Labels: BBAW, up for grabs

Hi, Kerrie,
Thanks for offering this contest. How fun! If I'm chosen as the winner, I'd love Ruth Rendell's From Doon with Death and Donna Leon's About Face :).
You can reach me on my own blog (margotkinberg.blogspot.com) or you can reach me at my gmail address. Look forward to finding out who's the lucky winner!

The choice is easy for me, Donna Leon, as this is the only one I haven't read yet; and the Ruth Rendell, as this not one of hers that I've read.

My googlemail account is kachicomp. Thanks for the competition Kerrie.

I´d like to win Donna Leon´s book (I own Rendell´s).

What a joy to have such an easy contest. I'd like the Ruth Rendell book. Thanks for hosting!

You read great books and I love your reviews very much.

You know I live in India.

Please enter me for either of the following:

ABOUT FACE by Donna Leon

FROM DOON WITH DEATH was Ruth Rendell

To express a familiar theme, if the cat paw lands favourably, I'd love the Donna Leon book or the Ruth Rendell.

Kia Ora from New Zealand. You know how to get hold of me (-:

Hi, I'd like to put my name down for the Brett Battles and the Ruth Rendell books. I'm in New Zealand! And I LOVE seeing a contest where some prizes are only open to Australasia - I'm so used to seeing so many US-only contests that it's nice to have an Australia/NZ-only one. ;)

My email addy is kiwibooklover at gmail dot com!

Thanks for the contest :)

What a fun way to have a giveaway. Simple entrance requirements. I live in the United States.

The two books I would like if I win are:
From Doon With Death
About Face

Thanks for the great giveaway.

I would love to win the titles About Face and From Doon with Death. I'm from Ohio here in the states. Thanks for the giveaway : D

would love to enter into the
About Face
or
Ruth Rendell book
thanks!

ps
I think you asked us to mention where we hail from?United States for me..

Great giveaway, I would loe From Doon with Death or Gone Tomorrow

Would love to win About Face, or Ruth Rendell book, both would be new authors for me.

I live in the United States

I'd love to win About Face and From Doon with Death.

My 2 choices would be:
The Cleaner & Gone Tomorrow

Vicki - the 2 books you've named are only going to ANZ residents - I'll put you in the running for one of the other two,

I would love to have a go at ABOUT FACE by Donna Leon or FROM DOON WITH DEATH. I'm stuck in the NT (Australia) so I need something to do!

I would choose Doon with Death and Gone Tomorrow. They both sound great.

I live in india. thanks for the contest.

please enter me elizascott2005 at yahoo dot co dot in

About Face or Gone Tomorrow look like good reads. It was fun checking out your blog today!

What a great contest - it's nice to see one with such simple entrance requirements! Thanks so much for having it.

I live in Canada, and would love to get to read From Doon With Death or About Face. My email address is lynzajw[at]gmail[dot]com.

Thanks for the chance. Please enter me. I would love About Face or Gone Tomorrow.

I love crime fiction!
It would be great to get the chance to read either Ruth Rendell's From Doon with Death or Lee Child's Gone Tomorrow.

I also tweeted this as lavender_lines

ooh - i'd love either of the books you are offering to the UK folks!

I can't pass this up: the Battles book and the Rendell book, although that one looks a little crowded for everybody wanting it. :)

My e-mail, which I think you have, is justareadingfool (at) gmail (dot) com.

I live in the USA so would like to enter the giveaways for Doon With Death and About Face. Thanks for the chance!

Please enter my name in your giveaway.
ABOUT FACE by Donna Leon
FROM DOON WITH DEATH by Ruth Rendell
djeanq(at)gmail(dot)com

I have been dying to try Ruth Rendell so I will put my name in for that one! I'm in Seattle.

Hello I live in the USA (Alaska) and would love to have either books (Dona Leon's or Ruth Rendell). Thank you for the oportunity.
stoner58 at gci dot net

I would love to be entered for Donna Leon-About Face and Lee Child-Gone Tomorrow. Thanks for the giveaway.
eswright18 at gmail dot com

Wow what a great chance. I'd love either of the NZ books. Good luck to everyone else.

This is great! I would love to win About Face and From Doon With Death.

I'd love to win all but ok Ruth Rendell first choice.

I'm in Canada and would be very happy to win the Donna Leon (have not read any of hers) or the Ruth Rendell.
kristinmhoffmann at gmail dot com

Count me in! I live in Spain.
I would love to read The cleaner and from doon with death.

I'd love a chance to win the Ruth Rendall. I'm in Japan. Thanks!

wow.. great contest
if I'm chosen as the winner, I'd love Ruth Rendell's From Doon with Death and Donna Leon's About Face .
because i'm from mexico

THIS COMPETITION IS NOW CLOSED.
Thanks to all entrants.
Winners will be announced shortly.

Please make sure you send me your snail mail details ( kasmith9 at esc.net.au)