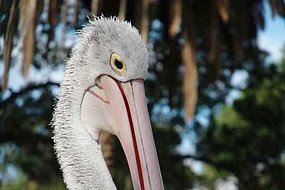 You'll probably think I'm right off my trolley marking the death of a pelican, but Mr Percival wasn't just any old pelican. Well, he was old, 33 years, and I guess that's pretty old so far as pelicans go.
But here in Adelaide, South Australia, even Australia he was an icon.

His death on Tuesday night has made the news all over Australia, in the national paper, and even a New York one.

All Australian children born from the late 1970s on know who Mr Percival was, the star of the 1976 film Storm Boy, set on South Australia's Coorong Coast, a fragile environment now threatened by global warming, the drought, and the diminished flow from the River Murray.

Mr Percival started off in the imagination of Colin Thiele, the South Australian educator, author, poet who wrote BLUE FIN and STORM BOY, among other books, and immortalised Mr. Percival for a whole generation of Australian kids.

Last year Stephen Orr wrote
"Colin Thiele's story is short, sharp and brilliant. He tells us about a 10-year-old boy living in a beach shack with his father. The boy finds three pelican chicks that have been orphaned by hunters. He names them Mr Proud, Mr Ponder and of course, Mr Percival. The book and film show his developing love for them, as well as the love and respect for his father (beautifully drawn, full of weaknesses) and Fingerbone, a local Aborigine."

I have strong memories of going to Marineland at West Lakes and seeing him there!

I must confess that I was surprised by his longevity. I had no idea that pelicans lived that long.

I too visited him at the now defunct Marineland and later at the zoo. I'm happy that he got to die of old age...not like many of the bird life struggling at the Coorong today :(

We watched "Storm Boy" again a few weeks back it certainly was a different Coorong back then. I also never knew that Pelicans lived so long, goodbye to a true SA Icon.