I listened to this an an audio book, downloaded from Audible.com. Read excellently by Tim Goodman, the book lasts for a little over 10 hours. The printed version was published in 2008.

I've always been a little put off by a the idea of a series featuring detectives called Bryant & May with connotations of boxes of matches (I couldn't resist the temptation of the image).

Someone is murdering women in London pubs, and the story comes in several parts. The first part reveals a series of four murders in separate pubs. But the first happened in a pub called The Victoria Cross, closed for over 50 years. If Arthur Bryant hadn't seen the victim go into the pub himself, then she would have just been a dead person on a street corner. But what has happened to the Victoria?

Old fashioned detecting by the Peculiar Crimes Unit identifies the murderer, but where to find him? And why did he do it?

#6 in the Bryant & May series, this is a fascinating novel.
Arthur Bryant is geriatric, possibly losing his memory, and should be retired. So should his partner, John May. But they bring to the unit an old fashioned meticulous investigating, and their clear up rate is the best in London.
The Peculiar Crimes Unit is a very interesting band of people. In this novel they have been joined by a new sergeant who is determined to make the idiosyncratic members of the unit toe the line, behave by the rules more. I enjoyed both the detailed descriptive passages, and meeting all the members of the unit.

The structure of the book is worth thinking about too. 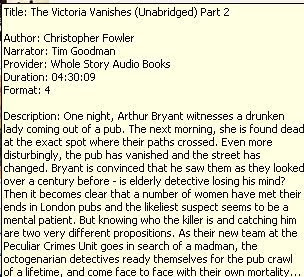 About half way through it appears that the story is over.
What else can there be to talk about? And then the page turns, figuratively speaking, and you discover that the capture of the murderer was just the first part. Fowler swings you into the next phase, a shocking relevation of what lies behind the murders, and then again you are brought to a climax, to find that all is not yet finished!

This is a series I will really be reading more of. I'll try to remember the name of the narrator Tim Goodman too. He does an excellent job.

Christopher Fowler is quite a prodigious writer, lots of books to his name, fiction, short-stories and non-fiction.

THE VICTORIA VANISHES won a CrimeFest award: 2009 Last Laugh Award (best humorous crime novel published in the British Isles in 2008)
I enjoyed the rather quirky sense of humour this novel shows.
It was shortlisted earlier in the year for a Dilys Award.

Read a review on EuroCrime, in which Amanda Brown says she enjoyed it immensely.

Christopher Fowler's website.
Read his background on the Bryant & May series.