My plan this year for my contributions to Friday's Forgotten Books hosted by Pattinase is to feature books I read 20 years ago - in 1993- from the records I have in my "little green book", which I started in 1975. In 1993 I read 111 books and was pretty well addicted to crime fiction by then. 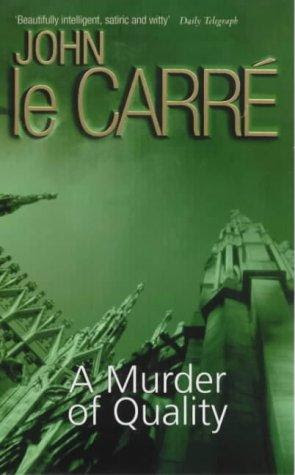 This time 20 years ago I had just finished John Le Carre's A MURDER OF QUALITY.

Published in 1962, this is #2 in the George Smiley series. It is the title that precedes THE SPY WHO CAME IN FROM THE COLD. I can see from my records that I followed up A MURDER OF QUALITY with #1, CALL FOR THE DEAD. I remember reading THE SPY... with an English class so this may well have been my inspiration to read the earlier two novels.

[Fantastic Fiction lists an omnibus, THE INCONGRUOUS SPY,  in 1961 as Le Carre's first publication. This actually contained the two novels CALL FOR THE DEAD and A MURDER OF QUALITY ]

The Berlin Wall fell in 1989 and so by the time I was reading these the setting was already in a world that has passed. However I remember crossing through Checkpoint Charlie in 1975 when the Wall was truly in effect. The contrast between West and East Berlin was incredible.
The first film made of THE SPY WHO CAME IN FROM THE COLD was made in 1965 starring Richard Burton.

But, as you'll see from the synopsis below, A MURDER OF QUALITY was not about spies and espionage.

The novel was adapted for television by Thames Television in 1991. It starred Denholm Elliott as George Smiley and featured a screenplay adapted from the novel by John le Carré himself. It also starred Glenda Jackson, Joss Ackland, Diane Fletcher, David Threlfall and Christian Bale. 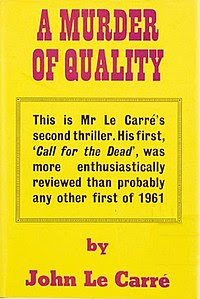 George Smiley was simply doing a favor for Miss Ailsa Brimley, and old friend and editor of a small newspaper. Miss Brimley had received a letter from a worried reader: "I'm not mad. And I know my husband is trying to kill me." But the letter had arrived too late: it's scribe, the wife of an assistant master at the distinguished Carne School, was already dead.

So George Smiley went to Carne to listen, ask questions, and think. And to uncover, layer by layer, the complex network of skeletons and hatreds that comprised that little English institution.

Kerrie - I think George Smiley is such a terrific character. This is one of the best espionage series there is, so I'm glad you've highlighted one the Smiley novels.

I'm not familiar with Smiley, but thank you for featuring this book, I shall have to check it out.

This is a great idea.thanks for posting blog.