Available through Wakefield Press in the Wakefield Crime Classics.
It is also available on Amazon for Kindle.
Two other Charlotte Jay titles:
A Hank of Hair
Arms for Adonis

Once Stella Warwick was meant to come to Marapai in Papua New Guinea as a young Australian bride. Now, a little over 6 months later, she comes to find out who murdered her husband.

Although her husband, a distinguished anthropologist in charge of protecting the natives from exploitation, was over 20 years older than her, and in reality she barely knew him, Stella feels that the verdict of suicide after David's death is really out of character. 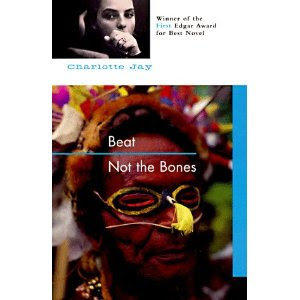 David Warwick died over 3 days walk into the jungle away, and as Stella attempts to visit there, she becomes aware that everyone is telling her lies. Nobody wants her to uncover the truth.

The novel is as much about how the officials of the Australian protectorate and handling cultural and climatic differences, as it is about whether David Warwick was murdered or whether he committed suicide. The story is played out against the background of interaction and conflict between a supposedly primitive culture and Australian civilisation.

Charlotte Jay lived and worked in Papua New Guinea 1942-1950 and obviously placed BEAT NOT THE BONES in a setting with which she was very familiar. This was her second mystery novel and Anthony Boucher commented on "its deft plot".

BEAT NOT THE BONES gives the reader plenty to think about.

You always pick such interesting!
I have not seen this one and now feel I must do so soon.
Loved your description of it. Thank you for picking this one.
http://mp4mobilevidios.blogspot.com/

Kerrie - The setting of this one sounds fascinating! Thanks for sharing.