Its 25 years since John Rebus appeared on the scene, and 5 years since he retired. But 2012 sees his return in Standing in Another Man’s Grave. Not only is Rebus as stubborn and anarchic as ever, but he finds himself in trouble with Rankin's latest creation, Malcolm Fox of Edinburgh's internal affairs unit.
Added to which, Rebus may be about to derail the career of his ex-colleague Siobhan Clarke, while himself being permanently derailed by mob boss and old adversary Big Ger Cafferty. But all Rebus wants to do is discover the truth about a series of seemingly unconnected disappearances stretching back to the millennium.

The problem being, no one else wants to go there - and that includes Rebus's fellow officers. Not that any of that is going to stop Rebus. Not even when his own life and the careers of those around him are on the line.

Rebus followers will love this book. In retirement, Rebus has got an appointment in the Cold Crimes Unit which is, predictably, in danger of closure. The retirement age for the police has been raised and Rebus is thinking of re-applying for a job in CID.

The recent disappearance of a girl near the A9 highway at Pitlochry appears to have links to earlier cold cases and so John Rebus gets a temporary assignment to the current investigation bringing with it the chance to work once more with Siobhan Clarke.
Rebus is still the maverick though, persistent in pursuing his own line of enquiries. There are some excellent examples of how he thinks outside the square, calling in favours, hobnobbing with crims, and following fragments of information. It is not long before Rebus blots his copybook but not before he has persuaded Siobhan Clarke that his way will get results. For Rebus it is the results that matter, not how you get them, but Clarke realises that the ends do not always justify the means, and of course that's where Malcolm Fox comes in: coppers must not have dirty hands. 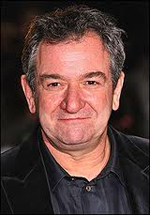 Officially John Rebus is not a policeman and so he and Clarke enter a new level of their relationship, where they are more partners, more working co-operatively, because he is no longer her boss.

It was lovely to catch up with John Rebus, and James McPherson does a wonderful job of bringing him to life - and who do I see as Rebus and Clarke?

The plotting of the story is tight, pathways absolutely littered with red herrings. characters leaping vividly from the page. Rankin is as good as ever.

And we have another Rebus to look forward to: SAINTS OF THE SHADOW BIBLE when Rankin brings Rebus and Fox head to head.