IF I TELL YOU.. I'LL HAVE TO KILL YOU, edited by Michael Robotham
Kindle edition available July 24
Allen & Unwin paper back

Crime fiction is the single most popular genre in international publishing and Australia has some of the finest practitioners when it comes to walking the mean streets and nailing the bad guys.

Whether you're a fan of crime fiction, true crime or a would-be crime writer, this collection of essays will provide laughter, understanding, insight, ideas, advice and hopefully some inspiration. Learn about Shane Maloney's near-death experience in a freezer, Leigh Redhead's adventures as a stripper and Tara Moss taking a polygraph test to prove her doubters wrong.

There are stories of struggle and triumph, near misses and murderous intent, as our best crime writers lay bare their souls and reveal their secrets as never before, along with their rules for writing and reading lists.

But beware. They will have to kill you... When someone wants to find you badly enough, vanishing is no longer an option
.
Sarah Keller is a young single mother living in Oklahoma with her five year-old daughter, Zoe. Her day job is to hunt out people on the run and bring them to justice. So imagine how it looks when a school bus accident sends Zoe to the ER and tests reveal Sarah can't be Zoe's mother.

Sarah has been living a lie for years and finally the truth is coming out. Who is she? Who were Zoe's parents? And why does Zoe's identity bring the FBI down on Sarah's tail in mere minutes?
The FBI is the least of her worries, though. Sarah needs to keep Zoe off the grid, but with a sinister religious cult also preparing to attack, where on earth can they hide?

Something deadly lurks in Sarah's past and its resurrection brings terror to all it touches.

When Dewey Andreas uncovers the identity of a mole embedded at a high level in Israel's Mossad, it triggers a larger, more dangerous plot. The mole was the most important asset of Chinese Intelligence, and Fao Bhang, head of China's Ministry of State Security (MSS), responds to the discovery and brutal elimination of the mole, by immediately placing a kill order on the man responsible – Dewey Andreas.

Dewey is tracked to Argentina, where he is on vacation with his fiancee, Jessica Tanzer, a U.S. National Security Advisor. A top-level kill team is sent in quickly and quietly, but their attack fails to take out Dewey. The collateral damage, however, is both horrifying and deeply personal. With nothing left to lose, Andreas is determined to have his revenge.

Once he learns who is probably behind the attack – and why they are after him – Dewey goes rogue, using all of his assets and skills to launch a counterattack. Andreas must now face the full weight and might of the MSS, Chinese Intelligence, and the formidable Fao Bhang, if he's to achieve his one last goal: revenge on a biblical scale, no matter the odds or the armies that he will have to fight his way through. Andreas – former Army Ranger and Delta – is a man of great skills and cunning. His opponent, Fao Bhang, is ruthless, determined, and with no limit to the assets at his disposal. In this conflict, there are only two possible outcomes. And only one Dewey Andreas. 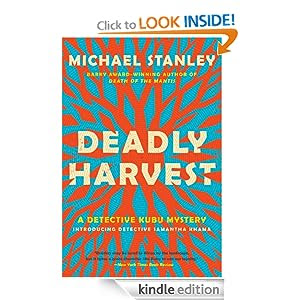 Deadly Harvest in Michael Stanley’s beloved Detective Kubu series tracks a series of murders and a mysterious witch doctor whose nefarious potions might hold the key to a web of missing persons.

When young girls start to go missing, Samantha, a new detective on the Botswana police force suspects that muti, a traditional African medicine, is the reason. She and Detective David “Kubu” Bengu race to stop a serial killer, all as the father of one of the victims threatens to take matters into his own hands.

Weaving together a thrilling mystery with a fascinating look at modern-day Africa, Deadly Harvest is filled with elements suspense and plot twists that will keep you captivated until the very end. 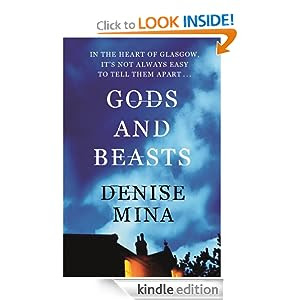 A Glasgow post office one week before Christmas. Martin Pavel cowers on the floor, his eyes locked on those of a terrified child. Above them a masked gunman wields an AK47 while the boy's grandfather calmly volunteers to help the robber gather the money. Then the old man stands passively, hands by his sides, while the gunman raises the barrel and shoots him to shreds.

Recently returned to work after the birth of her twins, DS Alex Morrow is called in to head the investigation. Why did the grandfather offer his help? Was it a moment of madness, a noble act of self-sacrifice, or did the old man and his killer share a dark past?

Morrow's enquiries lead her to the door of Kenny Gallagher, a politician fighting for his political life - and his marriage - after he's publicly accused of having an affair with a young employee. And unknown to Morrow a temptation too great to resist leads two of her colleagues, DCs Leonard and Wilder, to make a rash decision and leaves them at the mercy of a ruthless blackmailer.

The complicity of an old man in his own death, a promiscuous politician and a bag of untraceable money - one city, three crimes and a powerful connection that runs from Glasgow's dark criminal underworld to the international spheres of the super rich.

THE CORPSE ON THE COURT, Simon Brett
Library book - this will bring me up to date in the Fethering series.

Jude's life has been turned upside-down thanks her new mant, Piers Targett, who's keen to get her involved in his hobby - or obsession - of Real Tennis. But when one of Piers' friends dies on the court in suspicious circumstances, Jude finds herself caught up in the police investigation.

Meanwhile, Jude's neighbour Carole is trying to identify the human remains known locally as the 'Lady in the Lake.' As the two investigations become intertwined, Carole and Jude's efforts to find the truth look set to lead to more murders.
Posted by Kerrie at 3:02:00 pm

Kerrie - Oh, you've got some really good 'uns here! I'm very much looking forward to what you think of If I Tell You..., and of course, you've got the Brett, the Stanley... yup, good reading ahead, I predict.