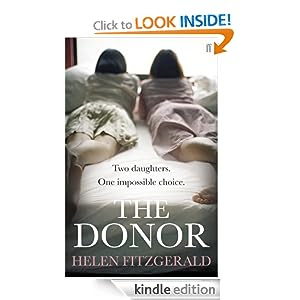 Will Marion has two perfect kidneys.

His daughters aren't so lucky. Question is: which one should he save?

Will's 47. His wife bailed out when the twins were in nappies and hasn't been seen since. He coped OK by himself at first, giving Georgie and Kay all the love he could, working in a boring admin job to support them. Just after the twins turn sixteen, Georgie suffers kidney failure and is placed on dialysis. Her type is rare, and Will immediately offers to donate an organ. Without a transplant, she would probably never see adulthood. So far so good. But then Kay gets sick. She's also sixteen. Just as precious. Her kidney type just as rare.

Time is critical, and he has to make a decision.

Or is there a fourth solution - one so terrible it has never even crossed his mind?

Helen Fitzgerald is one of those authors able to take the reader out of their own world to thinking through the options surrounding a particular issue. Twin teenage daughters both needing a kidney transplant forces Will to look for his wife Cynthia for the first time in 13 years. If it was just one daughter needing a kidney then he would willingly donate one of his. But two kidneys means two donors.

Will employs an agency to search for his wife and this story branches out into Preston's story too, for Preston is also a teenager. And then there is Cynthia's story. She originally ran away to live with Heath a childhood sweetheart who has spent most of his life in jail.

There is a lot of pathos in this story, missed chances, lives that haven't turned out right, but there's a lot of humor as well. I thought the characters were well drawn even down to Will's parents, apologetic because they are old and because their kidneys are not suitable for donation.

How does it become crime fiction?  I think THE DONOR Is really only on the fringes of crime fiction although murders are committed. But they are not really the focus of the story. The central issue is how to resolve this problem of needing two kidneys.

I have also reviewed DEAD LOVELY

I also read The Cry but preferred this one. I consider an emotional mysterious read.

Kerrie - If The Cry is any indication of how well this one's written, I feel I'm in for a very good read.