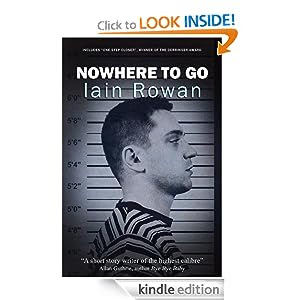 An ordinary man who finds himself caught up in a bank raid gone wrong. A murder caught on security camera where the victim doesn't exist. A man with just months to live, who is already living in hell but decides to take on the devil. A mob accountant babysitting a hired killer on a trip to the countryside, and a burglar on an easy job who finds it might not be so easy after all. A con-artist conned, and what a man will do when in the grip of an obsession more important to him than his own life.

Eleven crime stories first published in Alfred Hitchcock's, Ellery Queen's, and elsewhere by award-winning writer Iain Rowan. Eleven stories of what people do when there is nowhere left to go.

Iain's short fiction has been reprinted in Year's Best anthologies, won a Derringer Award, and been the basis for a novel shortlisted for the UK Crime Writers' Association's Debut Dagger award.

This certainly is a very readable collection of short stories, each with a twist that I didn't see coming.
What I mainly like about short stories is the completeness of their plots and Iain Rowan is certainly a master of that.
My rating: 4.4

I've written both novels and short stories, mostly crime fiction.
ONE OF US is my debut crime novel. It started as a short story published in Hitchcock's Magazine, became a novel, and ended up being shortlisted for the UK Crime Writers' Association Debut Dagger award for best unpublished novel.
I've also had over thirty short stories published. Some of those stories have been reprinted in Year's Best anthologies, won a Derringer Award, been voted into readers' top ten of the year, or been in anthologies nominated for awards..
NOWHERE TO GO is a collection of eleven of my previously published crime stories, many of which appeared first in print in magazines like Hitchcock's and Ellery Queen's.
ICE AGE is a collection of eight stories of the strange and the chilling that have been published in various places over the last few years.
And last, but not least, SEA CHANGE is something different again: a young adult novel like those I loved as a child by writers like Alan Garner and Susan Cooper, about haunted, folklore-ridden England.
Posted by Kerrie at 12:04:00 pm