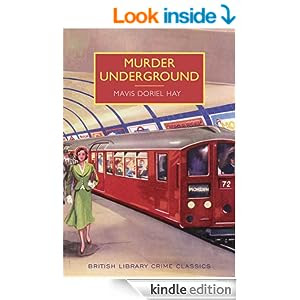 When Miss Pongleton is found murdered on the stairs of Belsize Park station, her fellow-boarders in the Frampton Hotel are not overwhelmed with grief at the death of a tiresome old woman. But they all have their theories about the identity of the murderer, and help to unravel the mystery of who killed the wealthy ‘Pongle’. Several of her fellow residents – even Tuppy the terrier – have a part to play in the events that lead to a dramatic arrest.

This classic mystery novel is set in and around the Northern Line of the London Underground. It is now republished for the first time since the 1930s. Includes an introduction by Stephen Booth, award-winning crime writer.

The structure of this novel hinges on the two tenets of motive and opportunity and much of the plot focusses on constructing a timeline to show who was in the right place at the right time to commit the murder. This strategy wears a bit thin as the novel progresses.

Dorothy L. Sayers appears to have approved of it:

“This detective novel is much more than interesting. The numerous characters are well differentiated, and include one of the most feckless, exasperating and lifelike literary men that ever confused a trail.”
(Dorothy L. Sayers Sunday Times)


For me, the victim's name, Euphemia Pongleton, feels like a joke that went wrong: something that was meant to amuse the reader but somehow doesn't. Miss Pongleton is found strangled, "lying like a heap of old clothes", half way down the circular staircase of Belsize Park station, with her dog's leash wrapped around her neck. Her nephew Basil actually discovers the body but, for a variety of reasons, is anxious to keep that fact hidden from the police investigation. He confides in the real murderer who doesn't become an obvious suspect until towards the end of the novel.

The author does allow a little humour to poke through every now and then, and there is some pleasure in extracting the truth from the muddle of characters and their motives for doing away with Miss Pongleton. There is also the tangle of a stolen broach, a missing string of pearls, and a missing will. All this lends a complexity to the plot which the author does well to untangle.


About the author
Mavis Doriel Hay (1894–1979) published three detective novels in the 1930s that are now extremely rare. Hay’s The Santa Klaus Murder is also published by the British Library.

Hmmm...sounds like a book that could've been much better than it turned out, Kerrie. Glad you found parts of it to like though.

going to read this...