Agatha Christie and the Search for a Superior Sleuth

When I began my personal journey on the Agatha Christie Reading Challenge I did so in hope that I would learn something about how Agatha Christie thought.
I gained the impression that, right from the beginning, even though she had "discovered" a very good detective in Hercule Poirot, she was always experimenting and searching for another.

Here are the first ten titles, courtesy of Wikipedia. 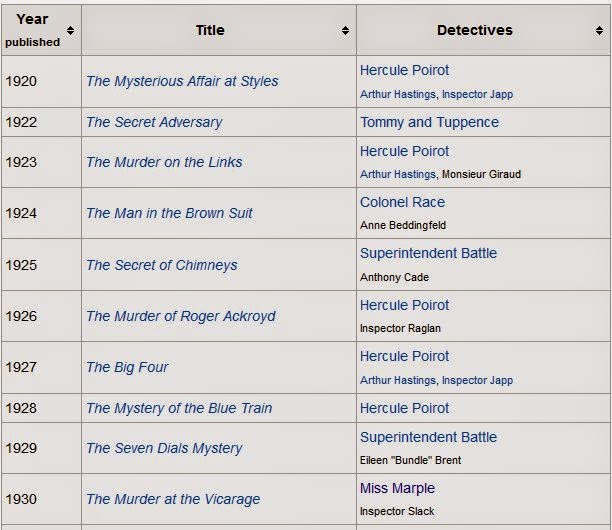 Although 5 of the novels featured Hercule Poirot, the experienced, fastidious, though aging Belgian, we can also see that she introduced a couple of "bright young things" in search of a job, a military man, a policeman, and then finally a spinster who was a a bit of a sticky beak.

Ideas of international conspiracies and espionage come high on the list as she plays around with forms of the genre, as does the various legacies of the Great War.

Miss Marple does not seem to have hit the spot, because she doesn't appear again in a novel for another decade.

Here are links to my reviews:
But to focus on the novels only tells you part of the story. Miss Marple for example made her first appearance in 1927 in a short story called the The Tuesday Night Club which was published in a collection in 1932. See my list of short stories.
Watch out for my next post about her search for a sleuth.

Interesting perspective, Kerrie. Perhaps that search for 'just the right sleuth' added to her writing?